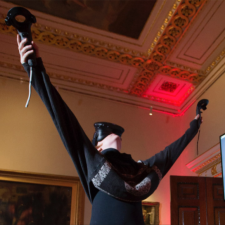 The first ever 3D printed artwork created in VR will go on display to the public from 12th – 14th January 2017 as part of an exclusive project between HTC Vive and The Royal Academy of Arts, called Virtually Real. Friends of the Royal Academy will be treated to a preview on 11th January 2017.

This experiential display will showcase the potential of VR in the visual arts. Visitors will not only be able to see the artworks on display but they will be able to experience the making of each artwork in VR using HTC Vive. Members of the public can walk through, over, under and around the artwork as it is created around them, fully immersing themselves in the process.

Virtual And Physical Worlds Of Art

Mark Hampson, Head of Fine Art Processes at Royal Academy Schools said, “The exciting emergence of new technologies for art production is paramount in our thinking at the RA Schools.” He went on to say that the exhibition, “Will extend our knowledge into the relatively unchartered territories for works of art using virtual and digital means.”

Peter Frolund, VP of VR (Europe) at HTC said, “The artists have created some truly unique pieces that visitors can not only view in virtual reality, but observe and interact with during the creation process. We see this project as the first step in illustrating what can be achieved when the virtual and physical worlds of art are combined, and hope to inspire future creative concepts.”

Tickets are limited and must be pre-booked in advance, costing £45.00. You can find out more here.