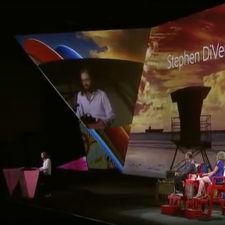 Adobe unveiled a new in-VR video editing software, Project Clover at its recent Adobe MAX event. As part of the ‘Sneak Peeks’ program, Stephen DiVerdi, Senior Research Scientist at Adobe Research took to the stage to demo the software in front of a live audience.

Project Clover works works with Adobe Premiere to allow end users to edit 360 videos within their headset. Constantly putting on an HMD to check footage, then removing it to edit and going back to the headset again is a tedious workflow; Project Clover aims to streamline the process by offering in-headset video editing.

DiVerdi demonstrated how the system works using an Oculus Rift and Touch controllers. As he donned the Rift, DiVerdi observed that, “All of a sudden this makes a lot more sense. Now I understand what my video’s all about.” Using a Premiere style timeline interface, he could line up a cut from one clip to the next so that the key object for the new clip arrives in the user’s view.

DiVerdi said this is a, “Problem that’s unique to VR video where before and after a cut you might have some action that’s important and you want them to both be in the same part of the scene so that your audience doesn’t lose what they’re looking at.” Using the Rotational Alignment Tool, users will be able to toggle back and forth between two clips, then click and drag to rotate them into alignment.

This sneak peek at Project Clover from Adobe shows that the Creative Cloud is embracing VR and we look forward to finding out more about the software in future announcements. DiVerdi closed his presentation by saying, “This is the kind of editing that you need to be able to do in VR and this is just a taste of what we’ve implemented. Hopefully this gives you a little idea of what the future’s going to be for how you’re going to edit your videos.”