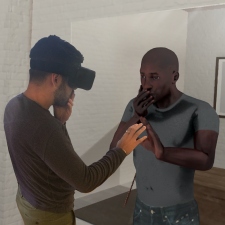 Implicit bias refers to measurable, objective attitudes and stereotypes that everyone carries, whether they’re aware of it or not. In recent months, implicit bias has become a topic of growing interest – and concern – leading to discussion of national programs in the States to address it.

Virtual Reality startup SPACES Inc. has created an implicit bias VR program that can be used by scientific researchers, corporate trainers and law-enforcement organizations. “VR is enabling us to understand how implicit bias affects our views of the world and the way we work and interact with others,” said SPACES CEO Shiraz Akmal.

Step Into Someone Else's Skin

Initially developed to assist an academic research examination of implicit bias, the SPACES program ‘embodies’ participants; bringing to life the old adage of “stepping into someone else’s skin” to develop greater sensitivity. As applied in the research project, the SPACES program, which has been in development for several months, illuminates the potential of VR technology to reduce implicit bias.

“The work we’ve done with researchers indicates that VR could possibly reduce the effects of implicit bias,” Akmal said. “The idea that VR can be used for much more than entertainment is one of our core philosophies, and is particularly important at a time when the issue of racial sensitivity is reaching a critical point in our society.” The academic research study powered by SPACES’ technology was one of the first projects that attracted the company’s attention when it was formed earlier this year, he added.

Presidential Debate: Bias A Problem For Everyone

During the first presidential debate between Democrat Hillary Clinton and Republican Donald Trump on Sept. 26, Clinton said of implicit bias, “I think it’s a problem for everyone, not just police. I think unfortunately too many of us in our great country jump to conclusions about each other.” The SPACES implicit bias VR program is designed to be used in both research environments and in training programs, ranging from law-enforcement to corporate training.

SPACES Inc. is a privately held virtual reality startup that has raised more than $3 million in initial funding and has also entered a $30-million joint venture with China-based Songcheng Performance Development Company Ltd.