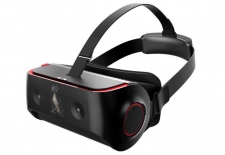 Californian Mobile technology company Qualcomm is to release its all-in-one VR headset technology to third party manufacturers by the end of the year. The Qualcomm Snapdragon VR820 virtual reality reference platform is based on the Snapdragon 820 processor and uses the Snapdragon VR Software Development Kit.

The hardware will feature integrated eye tracking with two cameras, motion to photon latency less than 18ms, dual front-facing cameras for six degrees of freedom and AR/MR, four microphones, a gyro, accelerometer and magnetometer sensors. Offering 1440 x 1440 resolution for each eye, the VR820 outperforms the 1080 x 1200 of both the Oculus Rift or HTC Vive. The refresh rate will be lower though, at only 70Hz instead of 90Hz.

The VR820 has been created in partnership with Goertek, a Chinese electronics company. The two companies previously collaborated on the wonderfully orange Pico Neo, which takes a different approach by packing the processing power into a handheld controller.