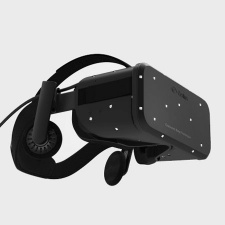 This wasn't really the news that the game development world was waiting for, as rumours had been whispered that the specifications of the retail unit, if not the unit itself, would finally be unveiled.

While this wasn't the case, Crescent Bay still managed to create quite a storm.

The most immediately noticable difference over the Rift's DK2 is an array of tracking LEDs peppering the surface of the visor, but also populating a plate at the back of the head where the new over-the-top strap meets the horizontal straps.

Accompanying the new 360 degree tracking is a new display that, although Oculus has thus far refused to talk specifications, is a noticable improvement over previous dev kits. According to those who went through the standing demos at the conference, the 'screen door' effect, which is the result of being able to see the gaps between pixels when so close to the LCD surface, has now gone, and a higher resolution image takes its place.

The effect is reportably incredible, and the virtual reality experience is further enhanced by the inclusion of built-in audio.

The general consensus has been one of surprise at the choice of 1980s-style over-the-ear headphones that are attached to the Crescent Bay headset, though again, many attendees did voice their surprise at how effective these were in use.

This could, in part, be thanks to Oculus licensing RealSpace3D's head-related transfer function technology, that works to replicate the ear's ability to position sounds within a 3D space.

Combined with Crescent Bay's design tweaks that make the headset lighter and more ergonomic, it seems Oculus is closing in on its final launch design, even if this isn't it.

"This prototype shows off the features, the quality, the presence that we need to deliver for consumer VR," CEO Brendan Iribe said during his keynote, though he did qualify it with, "We're not there yet."

Current rumours point toward a summer 2015 launch for the retail Oculus Rift, so despite Crescent Bay demonstrating another leap forward toward virtual reality, we can probably expect at least one more dev kit before the consumer specs are finally locked down.