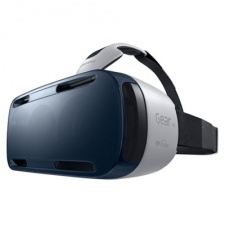 September 3rd, 2014 - 04:02pm
By Jon Jordan, Contributing Editor
If its drive on smartwatches and fitness trackers wasn't enough, Samsung has now stamped its mark in the world of virtual reality.

In partnership with Facebook-owned Oculus, it's announced its Gear VR hardware.

Calling it "a completely new way to experience and consume mobile content", the Gear VR is an interesting hybrid which involves the company's Note 4 tablet and a new headset.

The headset contains the lens structure which provides the VR experience when you slip the 5.7-inch Super AMOLED display of the Note 4 tablet into place.

In terms of the deal with Oculus, it's providing the software platform that ensures the VR works properly.

"The deep technical partnership with Samsung has enabled us to create a virtual reality headset with world class resolution and performance, all on a completely mobile platform."

In terms of specific software that will ship with Gear VR, that's centred on bonus movies content such as Marvel's Avengers; Age of Ultron, Pacific Rim Jaeger Pilot, VR media from IMAX and DreamWorks, and a movie from Cirque du Soleil.

One game has been mentioned though: Protocol Zero (a working title), which appears to be stealth shooter from DeNA. In particular, it will offer up VR-friendly effects like night vision, X-ray vision, and thermal vision.