Try It Out And See Where It Goes... 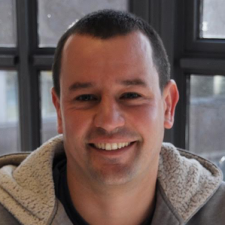 We know Opposable Games make games – the clue’s in the name, after all - but then they also make marketing apps. And run a bustling games industry office with space for hire. And organise an annual VR event on a global scale... We asked Ben Trewhella, Managing Director and Dan Page, Marketing Manager to explain how these pieces fit together for the Bristol based studio.

Ben Trewhella set up Opposable Games five years ago with grant funding paying the bills, if not the wages. As he recalls, “We worked unpaid for nine months to a year; but that’s how you go in the beginning!”

The first game the new company released was Clockwork Racers, a Micro Machines type game that featured the multi-screen technology that would go on to become One Touch Connect. Thinking outside of the toy box, Opposable offered the tech to the development industry as a plug-in, while the company moved on to contract work that included Embarrassing Bodies: Angry Boils for Channel 4.

With client work providing a revenue stream, the studio built a reputation for games that were technically demanding, but Opposable were already eying up VR. As Trewhella recalls, “When Oculus became a thing, we immediately saw the potential for doing games in it. We did a few demos and prototypes on Rift early on at games jams and in our spare time.”

That interest in VR turned into more client work under the Opposable VR banner, this time with the recently released Adventure Time I See Ooo for Cartoon Network. Trewhella observes that, “Any app is very difficult to see in the app stores, so we put together a package with a branded, limited edition headset and that cuts across the visibility thing because you go into Forbidden Planet and there it is.”

Trewhella had experience of running a B2B app development company prior to founding Opposable so he, “Knew how to set up a company that would grow and work for clients and build business applications. I saw that VR was going to be different in some ways, but it would be similar enough that it was the thing to go for.” And Trewhella believes those similarities gave Opposable VR an advantage, “Because we’d conquered the tools and we knew how to use Unity. We were in an infinitely better position to all the mobile app developers and web developers who would otherwise fill this space.”

We were running around showing VR to anyone who would listen.

How did Opposable turn this opportunity into actual business? “We were meeting devs and running around showing VR to anyone who would listen and we attended events, helping out The Guardian and the BBC. It became very apparent that anyone who tried good VR would say ‘This is great and it would work for our company.’”

As a result, over the last 18 months the studio began to work with companies such as PokerStars and Akamai who were looking at using VR as a promotional tool. Trewhella observes that, “Now it’s much more about trying to push beyond that. Now we know VR and nobody’s going to be impressed just because it’s VR. What is better about VR? What new things does that give us?”

The Pace Of Progress

Is Trewhella frustrated at the pace of progress in VR content? “You assume that people will move with your company’s imagination, but it’s taken people a while to move on from the marketing things. They are great and they’re slowly morphing into these kinds of ideas anyway.”

One of those new things could be what Trewhella calls ‘Emergency Response Rooms’. Extending their experience of multi-screen development, the studio has begun work on data visualisation suites that will enable users to access data in a virtual environment. Instead of needing multiple monitors and a large space to view complex data streams from a range of sources, the user simply dons a headset. This could be big news for global businesses, as set-up time for a mobile nerve centre would be drastically reduced. As Trewhella says, “You can wander around a whole room and have lots of data feeds; it’s Minority Report kind of stuff!”

But this kind of new technology doesn’t hit its stride overnight; Trewhella believes we’re still, “Two to three years away from VR content that is recognisably above what we have now.”

Back in the real world, Opposable has an unusual string to its bow; running not-for-profit office space. Trewhella says, “Bristol is a great place to find people who are keen to be involved in games development, or had been previously involved. But there weren’t a vast number of companies, so we got together with Auroch Digital and we said, ‘One month we’re so many people, then we bring in some contractors and they go, so we need a stretchable space’. So we decided to get an office, but also have it for other games developers.”

The company still operates out of the same building three-and-a-half years later. “It’s good because it connects us with what other people are up to and there’s a huge amount of knowledge share; we reduced our rent and increased our access to people who could code or draw,” says Trewhella. “For very little investment, we’ve created something in Bristol and now there’s similar spaces up and down the country, which is fantastic and shows that’s what’s needed by the community.”

A lot of research has been done in academia; there’s some lost wisdom there.

This shared workspace template has been so successful that the University of the West of England (UWE) is now working with Opposable to help set up office space for academics and companies to work on VR. With three years’ funding ahead of it, The Bristol VR Lab will open in July next year with permanent room-scale VR set-ups, desk space and teaching space.

Just how did this small games studio end up organising an international VR exhibition and conference? Trewhella recalls that in 2014, “We were doing a lot of client work and we were getting increasingly excited about VR. We decided to hold a meet-up for developers and twice as many people turned up as we expected.” Page adds, “People were coming from as far as Brighton and London! It was obvious that it was becoming a scene.”

Trewhella picks up the tale again a year later, “We realised that we’d have to do it again, so the meet-up turned into a one-day conference called South West VR.” Again, audience attendance was double what they expected. Then, “Last year, we knew we had something that could grow quickly, so we renamed the event VR World Congress. We aimed for 500 people, with a bigger space and more exhibits and we had people from Europe and China. We sold out weeks in advance! And next year once again will be a lot bigger, with more venues.”

As well as all the client work, property management and event organising, the games studio also finds time to... make games! More than three years in the making, Opposable Games released their magnum opus to early access for Oculus Rift on Steam last week; Salvaged.

Three years is a long commitment for a modestly sized studio, but Trewhella explains that, “Behind this initial game is a whole universe that we’re trying to build. We’re not going to rush to build it, but there’s a sci-fi world that we can build out over 20 years.” Part of that world-building can be seen in Opposable's all-new Salvaged VR comic, available on iTunes and Google Play now.

The narrative driven sci-fi game may have been in the works since before VR came around again, but Trewhella observes that, “We lucked out with Salvaged because the game wasn’t a viewpoint driven game with lots of movement; as soon as VR happened, it worked perfectly.”

Salvaged released first for Rift, simply because the studio started work on that format first; a Vive version looks set to follow. Page describes the game and the hardware demands it makes with, “You’re sat with four screens in front of you, each with a 3D scene which is the viewpoint of someone else. So you’ve got the 3D scene your sitting in, then the four screens, so that’s five. And then you have to render it for your second eye - that’s 10 scenes at once that are being rendered!” Trewhella points out that, “It’s not going to work well on every computer!”

Salvaged doesn’t have to be a blockbuster success for us to work on the next one because we have other things to back it up.

With all the different strands of the business working in concert, “Salvaged doesn’t have to be a blockbuster success for us to want to work on the next one because we have these other things that can back it up.” Trewhella says that while there are, “A lot of different things to focus on, it does mean that you survive to the next year. They all feed each other and it keeps things fresh. It’s been helpful because as we’ve grown as a company, that has alleviated cashflow, which has allowed us to push more into the conference and vice versa; it works both ways.”

That kind of flexibility may not be for everyone, but Trewhella remains true to his roots. “We’ve come from the indie world and those idealisms. Opposable has always taken the approach of let’s just see what happens. That doesn’t mean it’s perfect or easy; you end up creating a lot of work for yourself, but what’s the worst that can happen? If we try it out, then we’ll see where it goes...”

About Ben Trewhella And Dan Page

Ben Trewhella is CEO of Opposable, with over 10 years’ experience running companies that have delivered VR, games and mobile apps for well-known brands and contributes to the thriving start-up tech scene in Bristol. Dan Page is Marketing Manager/VR Consultant at Opposable VR and Creative Director at VR World Congress.