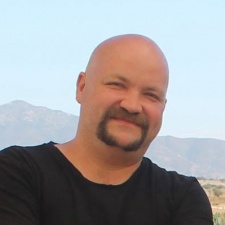 Imagine an atmospheric hidden object puzzle game set on an antique train. Think plush seats, polished wood, weathered luggage up on brass racks. The train appears to be empty, rushing through a snow-bound countryside. We got a chance to sample a demo of this at GDC in March. What's interesting was that we were playing this on a Gear VR phone.

This is Mystery Seekers by Gamaga, and it's been made using the company's Chameleon tech, a toolset plugin for Unity. It enables the Chilean team to create super low poly objects that look like they were rendered on a PlayStation 4.

Gamaga is seven years old and has a heritage of online and mobile games, including the popular Banana Kong and Operate Now! brands. With Chameleon, though, they're betting big on mobile VR. "It's all about art and optimisation," says Rod Contreras, who is CEO and Co-owner. "Mystery Seekers happens in a train, it's empty: there's a lot of mystery. Why is it empty? That’s for you to figure out!" The prototype exploration game is on target for an E3 release and we pressed the company for more information about how Chameleon works to create these slick images on a phone.

We were magicians creating an illusion, not architects developing a building.

Bryan Salt is Gamaga's Creative Director. He's a Brit and began working in VR back in the 1990s. "Back then, we were extremely limited with processing power," he tells us. "The game developers around then had a mentality that you were always inventing, creating new ways to maximise every last drop out of the processor, and in this endeavour 'creative' was more important than 'technical'. We were magicians creating an illusion, not architects developing a building. So, for example we would remove faces unlikely to be seen by hand, because even checking their direction had a negative hit of frame rate. These days you have efficient automatic culling algorithms to do all that for you in real time. Similarly, in the late '80s a low polygon object was 10 or 15 facets, a scene 250 facets. Now, our young 3D designers consider anything under 5000 polys a low polygon object!"

Several years later, ARM asked Salt to put real-time 3D on their phones' processors for the first time. "Again we were looking at around 250 polygons a scene, so it really pushed the creative side of the solution," he says. "We developed an engine and technology, but more importantly we also built a toolset to empower creative teams to circumvent the tight constraints. It’s a mentality we then introduced to Gamaga. The first big release since I arrived, Operate Now!, has some amazing real time 3D environments. Our world-class 3D team were able to take some old techniques and make them work in a modern development. The whole MRI scene is only 290 facets for example."

Developers have been ignoring the platform, as the challenges seem too difficult with the limitations VR imposes.

The team saw the opportunities to take that know-how into the VR space. "Developers have been ignoring the platform, as the challenges seem too difficult with the limitations VR imposes," claims Salt. "So we set about making tools that would make it easy to develop low polygon models with facet counts you would normally associate with the '90s. We wanted to make it easy to create detailed low poly objects even if they only had 20 or 30 facets."

The result is Chameleon. "The real benefit we’ve seen is to make our team unafraid of building low polygon worlds as the painstaking generation of believable textures and texture mapping is done automatically for them by our technology," says Salt. "Chameleon not only improves quality, but it reduces the workflow, and in particular removes the worry designers naturally have when considering how a high poly concept will translate to low poly. With Chameleon, what you see in the hi-res 3D concept model is pretty much identical to what you get in the real time low polygon model."

We give artists the freedom to create the environment that they want.

The team has been able to be much more audacious and bold with their work. CEO Rod Contreras doesn't want to reveal too many of Chameleon's secrets, but he adds, "We give artists the freedom to create the environment that they want: high-res, all the lighting they want. Then we process their scenes, their environments, and we create textures and polygons. We optimise the hell out of them! We had been watching a lot of mobile developments come into play and we saw an opportunity: no one is doing this. In Chile in particular, there’s no one besides us in mobile VR."

"We've developed the technology, and now every time we use it to create new assets for the scene, there’s something new to learn," continues Contreras. "How to use the lighting; how to use the particles; how to use movements and the controls… Especially the controls! We've had really good feedback on that. But we're always learning."

He believes that atmospheric adventure puzzle games are, "The best genre for mobile VR right now" and rejected zombie experiences and shoot-'em-ups. "We want to create something that is casual, that can work by only looking at your surroundings, without stressing you too much, so that you want to go back again and do it," he says. "So 'hidden object', for us, is the genre that works the best right now. We really like mysteries. We believe people will enjoy the mystery, the story, the investigation, the drama."

Find out more about Chameleon and Mystery Seekers at Gamaga's official website. To meet inspirational games developers working in VR, come to our own VR Connects in San Francisco at the end of June 2017.