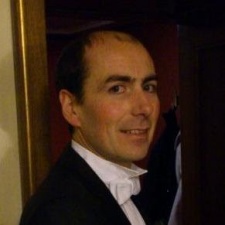 The Virtual Report: How will the upcoming Vive Tracker enhance the existing VR experience?

Graham Breen: The Vive tracker was developed in response to requests we’ve had from developers who are looking to create additional objects within VR. The trackers allow for any assigned object to be tracked within the virtual space. This means that for developers they can create even better experiences that tie in with the tracker and potentially accessories in the ecosystem.

TVR: What are the most exciting integrations of the Vive Tracker you've seen so far?

GB: We’ve seen a lot of really interesting uses of tracker so far, for example attached to a baseball bat allowing batters to face any pitcher in the major leagues. We’ve also seen it crossover into the more playful side of VR with the Vive tracker being attached to guns allowing people to play shooter games whilst holding what feels like a real gun. Perhaps the most interesting use I’ve experienced was by Deakin University from Australia who showed firefighter training in VR, it turned Vive from something fun into a very practical tool.

TVR: Why did you decide to create the Deluxe Audio Strap, and how does it improve the Vive experience?

GB: The Deluxe audio strap offers great convenience and comfort. The integrated headphones are adjustable to suit any size and the disc at the back turns to tighten for a comfortable fit. It really comes into its own for people using Vive over longer periods with its comfortable fit.

Viveport offers a route to market for those who are building VR experiences outside of games.

TVR: With the discovery and monetisation of VR games still in their infancy, how important is Viveport to your overall strategy and the VR industry?

GB: Since launching Vive, one of our main focuses has been to ensure the developer community have the tools they need to make great games and experiences as well as the best potential to monetise that content. We’ve already seen some of the early developers start to turn profit in mid 2016. Whilst Steam already has over 1,000 games available, Viveport is important in that it offers a route to market for those who are building VR experiences outside of games. We’re focusing on helping developers with monetising their content and also with discoverability. We’ve recently announced Viveport subscriptions, which will allow people to have access to new content each month for a small fee.

TVR: It's been roughly a year since PC VR became available to consumers. How do you reflect on that time, and what do you predict for the year ahead in VR?

GB: It’s been a really exciting year; it’s just 12 months since we launched pre-order with Vive and since then, we’ve seen Vive turn into a real consumer product that’s now available across 31 European countries, as well as across the world. The really interesting thing for me is how we’ve seen the ecosystem surrounding Vive grow from the first gaming experiences through to more varied types of games and also beyond into non-gaming. We’re also seeing the first accessories around Vive now with the Deluxe head strap, the Vive tracker and some of the innovations from third parties.

TVR: How do you feel about LG entering the market with its own SteamVR headset? Is healthy competition good for the industry?

GB: VR is clearly a growing market and we’re really excited at how the future is looking. Since launching Vive a year ago, we’ve already seen growth across a range of areas with Viveport, ViveX and Vive Studios. As 2017 moves on, we’re looking forward to more exciting news that will help reinforce Vive as the premier headset in the market.

Our focus is to provide the best VR experience.

TVR: Following the recent price cut for Oculus Rift, are there plans for HTC Vive to follow suit?

GB: Our focus first and foremost is to provide the best and most compelling VR experience in the market. With that in mind, we’re not planning to cut the price but rather provide more value to our customers by helping to expand the Vive ecosystem.

GB: We can expect to see even more of Vive through 2017 and the growing Vive ecosystem. Now that we’ve supplied trackers out to developers, we’re excited as to where their creativity will take them – we’ll undoubtedly see more great experiences and accessories to support them. With the ongoing growth of Viveport, we’re going to see exciting new ways of consuming content through subscription and also how VR content will grow across a range of fields - including education - which has great potential. We’re also going to be seeing outcome from companies supported through our ViveX accelerator programme.