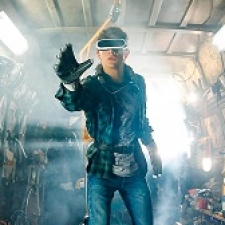 Steven Spielberg is Hollywood royalty. As a director and producer, he’s been at the helm of some of cinema’s most profitable and influential franchises. In a career that took off with 1975’s Jaws, and Close Encounters of the Third Kind two years later, to a new decade and family favourites such as Raiders of the Lost Ark and ET, Spielberg has the golden touch - winning so many Oscars we’re not sure even he can keep count.

So we’ll admit that we let out a little whoop when we heard that the DreamWorks founder was at the helm of the adaptation of Ernest Cline’s 2011 VR-based Young Adult novel, Ready Player One. Match-ups don’t get much more perfect than this - and a big name guarantees a big budget, which could be just the cultural shot in the arm that VR needs.

This isn’t Spielberg’s dalliance with XR, which came with 2002’s ahead-of-its-time anticipation of AR, Minority Report. The movie was based on a story by sci-fi legend Philip K Dick and starred pint-sized, big-nosed megastar, Tom Cruise. Its vision of gesture based interfaces has since gone on to influence a generation of UX innovators.

With that kind of track record not only in family-friendly films, but also bringing future visions to life, is VR poised for the mainstream when Spielberg’s Ready Player One is released in cinemas this week? We can certainly imagine the target demographic pouring out of theaters jacked on candy, sugary drinks and high-res visions of the OASIS, demanding that they ‘NEED VR NOW, mom!'

Our Focal Point panel doesn’t predict an inflection point as a result of the movie, but it prompted the Editor of our sister site, PocketGamer.biz, to ask if this could be the biggest thing to happen to Virtual Reality since the launch of the headsets.

We’ll watch with interest in the coming weeks to see if VR hardware sales accelerate in the movie’s aftermath - and PS VR’s timely £100 discount certainly won’t hurt - but you can be sure that the movie needs to spark the public’s imagination for it to have any impact on the industry at all. So is it a triumph or a turkey? Well, right now it has an ‘above average’ score of 83% on Rotten Tomatoes, while the Metascore is slightly lower - albeit ‘generally favorable’ at 66, based on 34 critic reviews at Metacritic.

We thought we’d look a little further afield and round up the reviews to see if we can find a consensus.

First port of call for many a box office aficionado, Empire magazine awards Ready Player One four out of five stars saying, “Spielberg has seemingly done the impossible: balancing sugar-rush nostalgia with an involving story to create a pure, uncynical, cinematic ride that recaptures the magic of his early films.”

The hugely influential Entertainment Weekly says, “Ready Player One is thrilling sci-fi popcorn fantasia that doesn't know when to say Game Over.”

Screen Rant has a similarly middling three out of five review that finds the film ‘good’ with the conclusion that, “While Ready Player One had the potential to be a fascinating examination of Spielberg’s place in pop culture history through the lens of a sci-fi/fantasy adventure, the final result is slick and technically daring yet makes for a hollow CGI-and-mo-cap fueled offering from the filmmaker.”

While movie critics seem to find Ready Player One an enjoyable, if limited experience, what do games journalists make of it?

Internet gaming giant IGN finds that, “Everything in Ready Player One ties together into an action-packed, upbeat, hero’s journey that keeps the film moving along at a thrilling pace. While it’s not particularly emotional and I was disappointed by how many questions are left open by its shallow visits to the real world, it’s still a lot of fun. Countless cameos and funny moments make it easy to plug into and enjoy.”

For its part, Polygon seems to relish the sheer spectacle of the movie despite a lack of substance. “If there’s a deeper meaning to the movie that Spielberg wants to convey, it’s that we undervalue human interaction and perhaps spend too much time escaping through technology. That doesn’t quite work out when the film makes the virtual look so wondrous and the real so bleak. But Ready Player One, more than anything, is designed for spectacle. And in that, it succeeds.”

The Verge addresses the differing strengths of the medium of film compared to printed fiction, “The film version of Ready Player One has some major advantages over the book. The exposition is just as bald, but once it’s done, Spielberg can focus on the endless dynamism of a world where anything is possible.”

So the games press seems to be largely onboard with the film, but for VR to break out into the popular consciousness, what does the mainstream press make of the movie?

Beloved of liberal Britain, the Guardian newspaper gives Ready Player One three out of five stars saying, “It’s a film in which Spielberg’s traditional reverence for the wonder and idealism of youth has had to compromise with wised-up survivalist toughness of the new YA mode. But what extraordinary visuals this films conjures up, with images that appear and disappear like quicksilver memes.”

The Independent matches the three out of five score with the observation that, “Spielberg’s dystopia is a nerd’s delight but this is a kids’ movie that pulls its punches. Despite being an inventive foray into the world of virtual reality, the film lacks clout where it counts.”

Style bible for monied gentlemen everywhere, GQ doesn’t seem so impressed. “Ready Player One ultimately pays a half-assed kind of lip service to the idea that reality is ultimately more important than fantasy—but those tossed-off platitudes are overwhelmed by the rest of the movie, which aims to thrill audiences by asserting the opposite.”

On the other side of the pond, USA Today is slightly more positive, awarding the film a score of three out of four, “There’s an overload of virtual visuals. Though some are quite stunning, like the… high-speed race with thrills and spills (imagine a hyper 8-year-old getting hold of the most insane Hot Wheels stunt set ever) and a sequence set in The Shining’s Overlook Hotel (complete with monster lady, creepy twins and ax-wielding maniac) that’s the highlight of the entire production.”

The Washington Post offers a slightly more philosophical 2.5 stars saying, “In the end, whether you love or hate this movie will depend on how you feel about video games — not just as narrative, but as art.”

Forbes finds the film to be fun as it observes, “Even if I argue that the storytelling leaves a bit to be desired, the primary action sequences are a visual delight and worth the price of admission on the biggest possible screen.”

And our antipodean cousins at Australia’s ABC are less than impressed with Spielberg’s treatment of the source material, “Ready Player One is a tender tribute to gamers from a filmmaker who doesn't really appear to understand or empathise with them.”

To draw a line of observation through the reviews of Ready Player One, it’s that this is a Hollywood spectacle with a blockbuster budget. High on visuals and excitement, low on substance. Go figure! Are those kind of middle-of-the-road reviews enough to kickstart a VR buying frenzy?