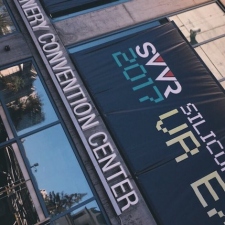 At the Silicon Valley VR (SVVR) conference and expo last week, there was more innovation on display than at most technology conferences. Whereas CES or even GDC this year were downright subdued compared to years past, almost every booth at SVVR was showing off a novel idea.

Now in its fourth year, the SVVR expo is run by the Silicon Valley VR organisation, which has been organising monthly meet-ups for the VR community since May of 2013. Its aim is to accelerate ‘the growth of a healthy, diverse Virtual Reality ecosystem’, and it also runs classes and workshops. Last week's event took place at the San Jose Convention Center and topic areas included games, medical VR, cinematic experiences, input and locomotion, VR arcades, business and ‘vsports’.

Social VR was a hot topic. While the innovative products at this latest SVVR show were diverse - from 3D cameras and scanners to new haptic devices and advanced eye-tracking systems - at the core was a deep desire to better connect with other human beings through the medium of digital VR equipment. Many exhibitors were displaying products that would be relevant to fans of Neal Stephenson's seminal VR novel Snowcrash.

Released in the early 1990s, Snowcrash was heavily influenced by the then-new fields of VR and telepresence. It was a natural conclusion to assume the two would converge in some way in the future - it portrayed an internet fully realised as a 3D VR world. Stephenson envisioned various hacks that could exist in such a space: his lead character, for instance, crafts an avatar the size of a single pixel in order to sneak around the 3D landscape undetected.

The desire to create something social like Snowcrash’s all-encompassing 3D virtual world has been with us as long as the book has. Second Life even famously implemented the single-pixel avatar, enabling its users to build exactly that for exactly the same purposes.

At SVVR this year, there were many takes on the Snowcrash experience. They ranged from the most fully realized version, Altspace VR - which currently sports many users who have also crafted spaces for exploration and socialization - to High Fidelity, which is an open source effort to build the equivalent of an Apache Web Server for hosting 3D spaces online.

Gavan Wilhite discussed the AltspaceVR scene at SVVR. The virtual world has hosted many events, thus far, including live chats with the likes of National Cyber Security Alliance executive director Michael Kaiser. These events are reminiscent of those hosted by Second Life in the past, but are much more immersive and inviting to the participants, said Wilhite.

That’s not to say there weren’t plenty of interesting ideas and talks pointing the proper ways forward. A historic layout of 1990s era VR headsets festooned a conference filled with 1990s references. Remember the sex scenes from Lawnmower Man? Ela Darling, the world’s first Virtual Reality cam girl, gave an in-depth look at the rather patent encumbered field of teledildonics. She suggested that VR makes for more interesting and stimulating experiences when it’s two-way…

The idea of creating a Snowcrash-like shared space is fun, but it's delivering new content for VR which remains an ongoing challenge. Many of the innovative products on the SVVR show floor were solving base-line problems. They were creating exciting new platforms (software or hardware) for VR, but not necessarily demonstrating great new content. Immersion, for instance, was demonstrating its haptic encoding plug-in for Unreal, while mindVR showed off its 360-degree camera and software that can fix faces in captured video. These products are solving the initial problems within a constrained problem space. Making VR work is by no means simple, and we now have better interface devices, faster screen refresh rates, and even an IEEE standard for AR/VR. But the real problem that lies ahead for this industry is the actual creation of content itself.

SVVR was flush with tools to help users and developers better experience VR, but what was definitely missing were tools to help speed the content development process itself. That’s not to say there were no end-to-end solutions available at the show: Noitom’s Project Alice is a full-suite solution for building out deeply immersive room-size VR and MR experiences, and even offered a full-hand tracking setup with its Hi5 VR Glove. Noitom's Tristan Dai also hosted a talk on the first day of the expo, outlining the company's year-long foray into mixed-reality, multi-user platforms.

Will The Killer App Come From Business?

Behind all of these tools and toys, people are still diving deep trying to locate the real killer app for VR. Noitom's booth demonstrated a range of experiences like the Project Ghost: Assault Squad Mixed Reality shooter game. Baobab Studios were at SVVR, showing their merging of film and tech with their VR animations INVASION! narrated by Ethan Hawke, and ASTEROIDS! starring Elizabeth Banks. And Tequila Works from Madrid were there with The Invisible Hours, a murder mystery VR thriller, in which players freely explore a web of stories within a sprawling old mansion. But some at SVVR would say VR’s killer app is, in fact, business-use cases.

At the show, this was primarily demonstrated by health care applications. From better visualisations and control of remote surgery equipment, to daily health and wellness routines supplemented by VR, the immersive nature of these devices seems to be enticing to the health care industry. On the other side of the fence, virtual meeting software was another popular business use, with multiple users white-boarding, or modifying a 3D model together.

But those seem to still be way off; it’s the interactive experiences, the immersive journalism and the clever new ideas that will bring users to VR. The problem is that most everyone has already experienced something similar by now, whether in an old 2D manner, or modern 3D way. As 2017 moves on, we’re hoping creative folks can push us into experiences – beyond Snowcrash and into something more like Neuromancer.

For your chance to hear more about the future of VR from some of the leading names in the industry, the VR Connects series of conferences comes to San Francisco on 27th and 28th June this year.

Want To Work On Our Global Events?