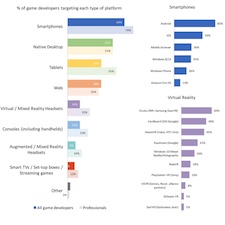 Virtual Reality is already as popular as consoles for game development, according to a recent survey by Developer Economics. The intelligence company is already seeking new data for its next report with exclusive prizes for our readers that take part using this link.

What follows is an extract on gaming, VR and AR from their most recent report, reproduced here by kind permission.

Video games are sometimes dismissed as frivolous. Serious software runs companies and changes the world. Games are a serious commercial opportunity themselves, earning somewhere near $100 billion in revenue in 2017.

However, perhaps more importantly, game developers are often the first to exploit new technologies. The hardware and software platforms that they decide to support can impact the fortunes of current and future industry giants.

By creating compelling new entertainment experiences, game developers entice early adopters to purchase new forms of hardware. This starts the positive feedback cycle of more users bringing more developers, who in turn bring more users. These network effects build an ecosystem around a platform which creates a moat that cannot be crossed with technical capability or cash on the part of rival platforms.

Third-party games were an important part of the value proposition that allowed Apple and Google to rapidly overhaul Nokia and Symbian, and then keep Microsoft (and Intel) largely locked out of the smartphone market.

It’s likely that hardware platforms which don’t support high-quality gaming will not get traction with consumers in the future. This is particularly important for Virtual and Augmented Reality platforms going forwards, although there’s another set of platform players here: game engines. The majority of all Augmented and Virtual Reality apps (not just games) are built on 3D game engines. The hardware platforms need the support of these engines, yet that’s unlikely without sufficient interest from game developers.

Nearly Half Of All Devs Working In Games

A massive 48% of all the developers we surveyed are building games, and it’s a safe bet that a significantly larger percentage will also choose platforms to use personally that have great games to play.

However, the majority of those game-building developers are not very serious about exploiting their creations commercially. Although most of them do publish their creations, just 17% consider themselves professional game developers. Professional developers tend to target more platforms, and types of platform, than their amateur counterparts, but sometimes they also tend to choose different platforms.

Native desktop and web are the only platform types are the third and fourth most likely to be targeted by professionals respectively, dominated by Windows classic, which has more than twice the level of developers targeting it as Windows modern (UWP).

Perhaps the biggest surprise is the popularity of VR development amongst game developers... The level of activity is well above anything the market would currently justify commercially.

Perhaps the biggest surprise in the data is the relative popularity of VR and console development amongst game developers. Only 23% of professional game developers are targeting consoles, favouring the PlayStation 4 over the Xbox One.

At the same time, although we’ve seen in previous research that games are extremely popular amongst VR developers, that activity has mostly been hobby development. As such it’s quite surprising to see 25% of professional game developers targeting Virtual / Mixed Reality headsets. It’s likely that many of these are not yet releasing commercial VR titles, but the level of activity is well above anything the addressable market would currently justify commercially.

It seems that VR has strong appeal for game developers and that makes it very likely that they’ll attract the early adopter game enthusiasts in sufficient numbers to kickstart the hardware adoption cycle. In this market, Oculus is leading strongly (60% of all VR game developers and 71% of professionals), but SteamVR is still in the race (52% of professional VR game developers). Oculus’ lead here reflects their first-mover advantage, but also the fact that they have both mobile and desktop solutions.

Mobile VR is going to be important going forwards.

Mobile VR is going to be important going forwards, with the next most popular platforms targeted by professionals being Google’s Cardboard (50%) and Daydream (34%). Mobile VR is very likely to beat PC-based VR to standalone headsets with large scale commercial adoption.

The adoption of Daydream is impressive given it was only announced in October [2016], and standalone headsets were announced while our survey was running. Perhaps an important indicator here is that HTC’s Vive running SteamVR was the best tethered VR experience available, but the first HTC Vive standalone headset is running Daydream.

However, it’s too early to count Microsoft out in the standalone VR race, and developers are hedging their bets - Windows 10 Mixed Reality has 28% adoption amongst professional VR game developers, while Intel’s Project Alloy [Now discontinued] is only being targeted by 7% of them.

Developers targeting platforms that users already have in their hands is not surprising; this is a new medium and games need players to give developers feedback.

Perhaps the strongest aspect of Microsoft and Intel’s (largely shared) position in VR, is that they see AR and VR as part of a spectrum they call Mixed Reality. They are designing platforms that support everything from a fully virtual world, to an entirely visible real world with some digital augmentation.

For game developers a virtual world is much simpler than integrating a game around the environment a player happens to be in. However, with the arrival of standalone VR headsets, player safety starts to require some awareness of constraints (like walls, furniture, and other people) in the outside world.

Game developers appear to recognise the common challenges, with a fairly large percentage of professionals (16%) targeting Augmented / Mixed Reality headsets. In the AR games market the mobile platforms lead, with Android currently the most popular platform, targeted by 72% of all AR game developers and 75% of professionals.

Apple’s iOS takes second place with professionals (49%), although the announcement of ARKit towards the end of our survey means we’d expect significantly greater adoption there in the near future. iOS 11 will provide a market-leading smartphone AR experience out-of-the-box.

To get a similar quality of real-world tracking on Android has required special hardware like Google’s Project Tango, which significantly cuts the addressable market and thus developer interest (only 19% of professionals target Tango). Google has responded with ARCore, but tracking quality and adoption remain to be seen.

Just outside the top AR platforms is ReticleOS from ODG (12% of all AR game developers and 19% of professionals), who have unveiled perhaps the most compact and stylish standalone consumer AR glasses so far. ReticleOS is also built on Android, which makes it relatively easy for developers to adopt while still reaching the much larger customer base with standard smartphones.

However, developers targeting platforms that users already have in their hands is not surprising; this is a new medium and games need players to give developers feedback.

Can I Get A Holo?

The much-hyped Magic Leap, who are yet to launch a consumer product, has attracted less than half as many developer adopters as Microsoft (just 18% of professionals). Their secrecy and NDA-only developer program may backfire unless the platform is a long way ahead of competitors at launch.

Developers are still hedging their bets for the next generation of gaming platforms.

Developers are still hedging their bets for the next generation of gaming platforms, and the longer the hardware takes to mature, the more power will accumulate in the hands of cross-platform 3D game engine vendors like Unity and Epic Games with their Unreal Engine.

Hardware platforms that come late to market will be doomed without support from these market gatekeepers. The game engines may end up with more influence over the industry than the hardware and OS vendors in AR and VR. Knowing which engines developers favour and why could become vital knowledge for platform owners.

However, even with cross-platform 3D engines, any differentiation of platforms at the interface layer still needs to be supported by developers individually, or we end up with a lowest common denominator across platforms. This is where we’ll be following the strategies of the various platform vendors with interest over the next few years.

The developer research program surveys in excess of 30,000 developers per year across more than 150 countries to help developers make better business decisions. The company’s 14th survey is now live. Developer Economics are offering a range of prizes for participants, including Oculus Rift and Touch, as well as an Acer WMR headset.

The first 10 readers of TheVirtualReport.biz who take part will qualify for discounted tickets to the XR Connects event, while all of our readers have the exclusive chance to win $50 Steam Store not available to other respondents.

For your chance to win any of these prizes and more, make sure you use this link - accept no substitutes!