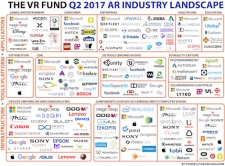 “Over the past quarter, the AR industry witnessed several notable moves by major players including Facebook and Apple, which immediately led to a robust increase in developer activity as well as extensive coverage in the market,” said Tipatat Chennavasin, co-founder and general partner at The VR Fund. “These strides are reflective of rising interest in AR driven primarily by device infrastructure and SDK tools.”

The VR Fund evaluated more than 2,000 companies for the landscape, and those selected meet a certain criteria of funding, revenue, mainstream coverage and/or major partnerships.

You can view the above graphic full size here.

You can watch Chennavasin’s presentation at last month’s VR Connects San Francisco here. The next event in the Connects series is XR Connects Helsinki 2017 on 19th and 20th September, with more than 60 expert speakers.