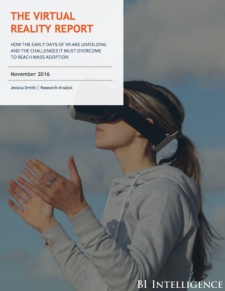 Shipments of VR headsets will spike by 1047 per cent year-over-year (YoY) to 8.2 million in 2016, according to a new report from BI Intelligence from Business Insider. That number’s remarkably close to the 8.5 million headsets we believe are already on consumers’ heads, as we covered in our recent The Size Of The VR Consumer Market feature.

This 1047 per cent growth will help propel the virtual reality space to exceed $1 billion in revenue for the first time, according to research by Deloitte. Powering that growth is an estimated 271% increase in investment in AR and VR companies from 2015, according to estimates from CB Insights.

It’s Not Big, But It IS Clever

But while 2016 has indeed been an important year for the VR market, it hasn’t necessarily been a big one — at least not compared to its future growth potential. VR headset shipments will continue to grow in the years ahead, driven by the introduction of new content that will appeal to a broad swath of users.

In the new report, BI Intelligence explores the highly fragmented and volatile VR market that emerged in 2016. It lays out the future growth potential in numerous key VR hardware categories, as driven by major VR platforms. And it examines consumer sentiment and developer excitement for VR, presenting which headset categories and platforms are most poised for success in the near- to mid-term.

This has been an important foundational year for the VR market. New hardware and content have brought more options to market to appeal to a wider set of consumers. But the growth seen this year is merely a foreshadowing of the future. The highly fragmented VR market today will eventually narrow as the market grows and matures.

After considerable progress in 2016, the VR market is ripe for transformation in 2017. Developers, consumers, investors, and hardware makers have a host of options from which to choose, each with their own strengths and shortcomings. The environment is poised for the first killer VR app to hit the market sometime in 2017, which will be a major catalyst for consumer adoption of VR hardware. Not all headset categories and platforms will emerge as winners in the near future. More immersive headsets that offer the best VR experiences are too expensive for most consumers. Alternately, affordable headsets that rely on smartphones as processors offer sub-par experiences that can induce sickness.