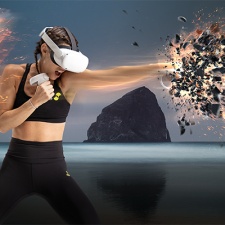 The fitness sector is one of the huge success stories for VR, which explains why Meta - formerly Facebook - has acquired Within, the company behind boxing-based fitness app Supernatural.

So THAT'S why the game was briefly featured in last week's Facebook Connect! (See our event report.)

In a blog post, Jason Rubin, VP of Play announced that, "Within (along with Supernatural) have entered into an agreement to join Meta. Supernatural will continue to be operated independently as part of Reality Labs, and will continue to create fitness, wellness, and social experiences in VR".

The deal is further reaching than the acquisition of a single studio with Rubin saying that, "Together we will also explore ways we can enhance future hardware to support VR fitness apps, encouraging other developers to bring new fitness experiences to VR. We believe fitness will be a massive success in VR where multiple third-party fitness apps can succeed".

Supernatural can presently be paired with the user's Apple Watch or Wear OS watch for statistics such as heart rate and it's the only app with this functionality that we're aware of. Meta CEO Mark Zuckerberg briefly showed some fitness hardware accessories including Touch grip covers during Connect, but with this acquisition, I bet he wishes they had their own Meta smartwatch to cross-promote. Oh, what's that you say, Bloomberg? There's an image of a possible Meta smartwatch from within the Ray-Ban Stories app...