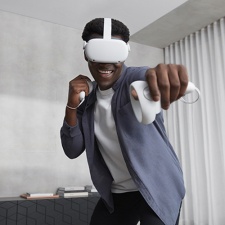 Research firm SuperData reckons that more than one million Oculus Quest 2 headsets were sold during Q4 2020.

In the firm's update for the quarter, the outfit said that around 1,098,000 units were shifted during this time frame, the most of any non-mobile VR headset ever. This comes in well above the competition; second place for Q4 2020 goes to PlayStation VR, which shifted 125,000 copies, while Valve's Index headset clocked in 61,000 sales. Finally the Oculus Rift and the newer Rift S sold 55,000 units between them.

Standalone devices like the Quest 2 will apparently make up 87 per cent of VR sales in 2021.

"The Quest 2 benefitted from a lower price than its predecessor and also from pent-up demand among those interested in joining the VR audience," SuperData wrote.

"The original Quest was sold out during much of 2020 due to the impact of COVID-19 on supply chains. The Quest 2 was also the first Oculus headset to launch around the holiday season, so its addressable audience included gift-givers in addition to VR enthusiasts."

For the full story head over to PCGamesInsider.biz.