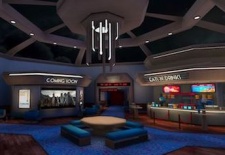 San Francisco-based company, Bigscreen – a company that primarily develops a social VR platform for virtual hangouts – has received $11 million from venture capitals in a recent series of funding.

Announcing the news alongside the recent partnership with Paramount Pictures to create a true VR cinema experience displaying films such as Top Gun, the new investment was led by True Ventures. The deal sees Toni Schneider, a partner at True Ventures, joining the board at Bigscreen.

Reaching a total of $14 million investment, Bigscreen plans on growing the current team, improving their social platform product and expanding to more VR/AR devices following positive demand and usage from audiences. Bigscreen claims that its metrics grew by over 300% in the past year.

Founder and CEO of Bigscreen, Darshan Shanker said, “Although VR may appear like a ‘silly, expensive toy for gamers’ today, VR/AR is the next computing medium. In the next decade, VR/AR devices will be lightweight, affordable, stylish glasses. Eventually, all of our day-to-day computing activities – web browsing, word processing, movie watching, and gaming –will occur inside immersive VR/AR headsets.”

Bigscreen’s partnership with Paramount will take advantage of Bigscreen’s VR social platform to immerse users into cinema screening experience. Users will be able to interact with friends before heading into the screen and watching films in 3D on a large screen, with dramatic lighting and dynamic audio. Using voice chat and avatars, it’s intended for users to feel as though they are sitting next to other people. “This is an innovative way to bring the immersive and social movie theatre experience into the comfort of the home,” says Shankar.

Bob Buchi, President of Worldwide Home Media Distribution at Paramount says, “Bigscreen’s Virtual Reality platform offers a new way for fans to experience films in their homes… We’re excited to be a part of this experiment using cutting-edge technology to give fans a new entertainment option.”

The experience is available in the US to people running Windows 10 on a Rift, Vive, Windows Mixed Reality headset or any SteamVR-compatible headset. There are no plans to bring the experience to Europe or Asia, currently. Bigscreen’s free app can be downloaded directly from corresponding stores for the headsets.

Bigscreen is developing a content lineup to regularly bring new films, TV shows and video content to its VR cinema every week in 2018. Top Gun will begin showing Thursday December 28 and end 7PM the following day.