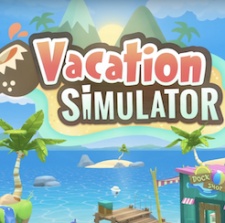 Jetting far away from completing mundane tasks in offices and restaurants, Vacation Simulator carries over the first game’s style and mechanics and whisks players away on holiday. Robots from the first game return with menial tasks to complete to stop Vacation from being completely stress-free.

Vacation Simulator follows a busy year for the Austin, Texas-based studio. Owlchemy Labs was acquired by Google for a non-disclosed amount after making our top 25 VR companies to keep an eye on this time last year.

CTO Devin Reimer said, “We’ve doubled down. We think that hands and interaction in a VR world is what makes it truly magical.” Addressing fears that the studio’s future output would be restricted to parent company’s Cardboard or Daydream hardware, when asked by The Games Awards’ Geoff Keighley if the game would be across all platforms, Alex Schwartz, also CTO at Owlchemy Labs said, “Yes, absolutely. We’ve always been multiplatform to the core.” Huzzah!

Vacation Simulator will be available on PS VR, Rift and Vive sometime in 2018.