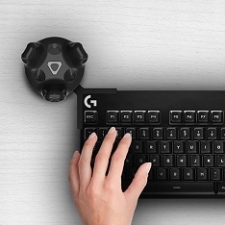 Swiss hardware manufacturer, Logitech, is working on ways to bring its gaming keyboards into VR. The BRIDGE system attaches a Vive Tracker to a known point on a real world keyboard, so that it can be accurately displayed in the virtual world.

BRIDGE has been created particularly for productivity-driven or desktop scenarios, but with obvious applications in games, social applications and content browsing. The software enables users to customise their virtual keyboard from the colour scheme down to the font on the keys. Particularly useful, you can specify which keys to replicate - or which to leave out - for bespoke control interfaces.

In a blog post, Vincent Tucker, Director of Innovations and Strategy at Logitech said, “We know that for a true typing experience you need to see your hands, and we’ve created a way to use the Vive’s existing tracking to do that. We’ve put in a lot of hard work to develop this experience so far and we know it can go much further with the creativity of the developer community.”

The BRIDGE Developers Kit is an SDK aimed at helping app makers and software developers solve the problem of text entry in VR. The kit consists of a Logitech G gaming keyboard, an accessory that positions a Vive Tracker correctly on the keyboard, and the associated software (MSRP $150). Logitech will be seeding 50 of these kits to select developers with the goal of partnering to create compelling new experiences centered around a VR keyboard.

Logitech has worked with development partners like Virtual Desktop, BigScreen and Autodesk to create the beta version of this SDK. This iteration is a proof of concept to spark discussion and feedback from the development community.

To get involved in the beta programme and provide feedback, apply here by 16th November.