I Expect You To Die Surpasses $1 Million In Revenues 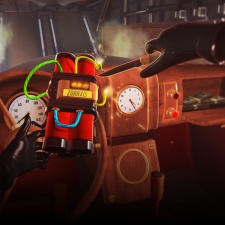 Schell Games' multi-platform title I Expect You To Die has generated over $1 million in revenue since launching in December 2016.

The game is available on the Oculus Rift, Vive, and PSVR. The milestone accounts for sales across all platforms, including Steam, Amazon, the PlayStation Store and Oculus Store.

To celebrate surpassing $1 million revenues, Schell Games released a mixed reality video about its game. New content for I Expect You To Die is also due to be released by the end of 2017.

"Our IEYTD team worked incredibly hard to create an enjoyable and immersive escape-the-room experience for players. To reach this $1 million threshold is another indication that our hard work is appreciated," said Jesse Schell, CEO of Schell Games.

"We love how enthusiastic our fans have been toward the game, and we hope they will enjoy this hilarious mixed reality video we've developed. In the very near future, we look forward to providing them with even more content for the game."

I Expect You To Die was a launch title on the Oculus Touch back in December 2016. It was released alongside 52 other titles designed for the controller.

I'm bullish on VR, but don't expect any revenues in the near future, says EA CEO