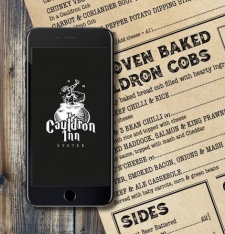 A new Exeter, England bar to open later this month claims to be the first AR bar in the world!

The Cauldron Inn will cover four floors of a building on the cobbled Gandy Street that was the inspiration for JK Rowling’s Diagon Alley in the Harry Potter books; the author studied at Exeter University.

Appropriately enough, the Cauldron Inn takes magical influences from the world of wizards and muggles – including The Leaky Cauldron pub - to create an AR app for its customers, although it is not part of the franchise.

Developed by Exeter company, Novelty Bars, The Cauldron Inn will use AR to create moving paintings, floating candles, themed rooms, riddles, selfie mirrors, and witches as waiters. Rooms include a ground floor inn, a library, a potion room, a common room, the Dragon Room and the Astronomy Room. An escape room on the top floor can only be accessed after users have collected all 50 clues, including 10 located around the city itself. Other AR incentives include discounts on food and free offers.

As reported by Devon Live, Novelty Bars said, "It's not every day you purchase 1,000 books or 500 potion jars or hire a green screen to film moving paintings. If our guests enjoy coming to The Cauldron Inn as much as we've enjoyed developing it, we would have done something right".