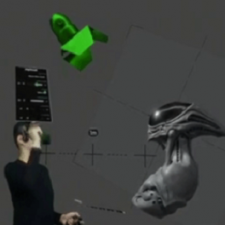 Oculus has brought native Mixed Reality capture support to Rift with a new stack, enabling developers to create videos and merge live footage of Rift users with in-game VR. This functionality will be rolled out to other pro users when more apps are enabled.

Relying on good old green screen techniques, external cameras and compositing, this is a world away from the immersive user experience of Microsoft HoloLens. Instead, Oculus’ take on MR is designed to better demonstrate the VR experience to anyone not immersed in the world themselves.

To create an MR scene, users will need a third Touch controller for tracking the location of a dynamic camera, which can be integrated with both Unity and Unreal apps. The SDK includes Oculus World Demo, the first app enabled for mixed reality capture.