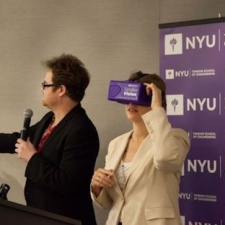 New York is setting up the first publicly-funded VR/AR facility in America to support start-ups, talent development, research and innovation. New York University Tandon School of Engineering will develop and operate a 15,000 square feet facility in the Brooklyn Navy Yard in partnership with the City University Of New York (CUNY) Lehman College’s VR/AR Training Academy and Development Lab in the Bronx. The facility will be funded by $6 million investment by the New York City Economic Development Corporation (NYCEDC) and the Mayor’s Office of Media and Entertainment (MOME).

The lab will create over 500 new jobs as part of Mayor Bill de Blasio’s New York Works plan, as well as provide support for new ventures with workspace and early-stage capital. The scheme aims to position New York as a global leader in the VR/AR industry.

Mayor Blasio said, “Augmented and Virtual Reality represents a huge new industry, and we want New York City to be second to none. We’re investing in the space, the talent and the research needed to make New York the global hub for this emerging technology”.

Council Member Dan Garodnick, Chair of the Committee on Economic Development added, “The virtual and augmented reality field is a rising influence in some of New York City's most iconic industries – including entertainment, media, and the fine arts. Today’s investment will accelerate exciting innovations in a variety of sectors and should lead to an increase in good paying jobs. I am looking forward to seeing the cutting-edge creations that will emerge from the VR/AR labs in Brooklyn and the Bronx.”