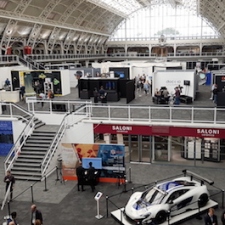 Ryan Booth carries out an endoscopy and freefalls into a parachute jump at last week’s Islington event, Virtual Reality Show 2017.

London hosted the first in an international series of VR Shows at the Business Design Centre at Islington last week. With a focus on being able to get hands on and involved in VR, all attendees had the opportunity to try out VR products, experience incredible interactive show features and meet the top brands and innovators working in VR today.

With 24 presentations across the two main stages, over three days, London was in for a treat. Speaking of treats, for all those post Easter sugar-hyped kids, the show also offered special children’s tickets for those 5-14 years (under 4s got in for free) on the Saturday, helping to advance the next generation of VR users!

On the topic of health, one of the show highlights from Alzheimer Research UK gave an insight into how cutting-edge tech is aiding in the battle of Alzheimer patients. Set from the mind of an alzheimer’s patient, the story told of the challenges that come simply from visiting the shops. The feeling of empathy was key here and it certainly came across; you were soon lost amongst unfamiliar alleyways, seeking to be reunited with your carer. Stories told from viewpoints like this, especially in the case of mental illness, have a lot of potential. Creating new bonds with those less like ourselves demonstrates the unique value of VR as a medium.

There were several very large pieces of surgical equipment on show too, which people could try for themselves, taking the place of surgeons. I had the task of performing an endoscopy, which I must admit I hadn’t seen at a VR show before. I thought I was going to set a record time, quickly manoeuvring round and darting the camera forward. It was then that the person on the stand informed me of the ‘patients’ pain level!

Over at the Military camp, one position you could put yourself in was parachuting. Free falling at first and being suspended in the real world by a harness. There were several abrupt moments when you changed from free fall to parachuting and then to land that really did jerk people backward. Two exhibitors from Coolermaster www.coolermaster.com were on hand to catch any unsuspecting victims from an actual fall. With the addition of a fan, you really felt the wind in your hair!

The Military 2.0 showcase also unfolded onto the main stage with an interesting look behind the scenes of a safer, next generation military. Lives could be saved through virtual training even before handling real weapons on a traditional army camp.

There were a few art installations pushing the boundaries with VR. Audience members were able to jump inside and become fully immersed in worlds that have been created by the artist expressing their visions. Whist an exhibition by Aoiesteban showcased an interactive 360 video running on the Samsung Gear VR, which was inspired by the Sigmund Freud psychology test. Your decisions to look in certain directions resulted in over 70 unique endings to the demo alluding to your personality type. You also had to look around the art installations using the phone’s back camera as your vision to advance the story.

One stand out example was Kevin Mack’s Blortasia. This VR experience was running on the HTC Vive, while Zen Parade, a similar version was on the Samsung Gear VR. In both versions, you move through a procedurally generated world of artistic shapes covered in different moving colours of paints. The experience is very relaxing, one major contributing factor to this is the music ‘Lotus Heart’, which was recorded around Tibet by Kevin’s son, Ray.

With the Vive version, you’re able to control the movement and even speed up once you become comfortable, while on the GearVR version you move in a set path, which was a bit of a shame as the touchpad could have been better used. The experience was created in Kevin’s own modelling tools, which were made using Houdini over his 30 years creating virtual art. The experience runs on the Unity engine.

For those at the show, it was great meeting you; for those not able to attend, I hope you’ve enjoyed reading through the highlights here.

We’ll also be attending VR Connects in San Francisco at the end of June and look forward to seeing you there!