US Senate Hearing On The Future Of AR 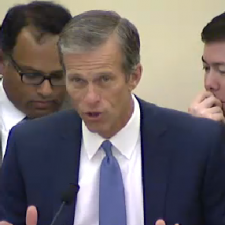 The US Senate held a special committee hearing titled Exploring Augmented Reality, with the goal of examining the emergence, benefits and implications of AR. Senators asked a panel of AR and technological experts a multitude of questions, mostly concerning personal security and the safety risks around emerging AR technology.

The expert panel featured Brian Blau, Research Vice President of Gartner, John Hanke, CEO at Niantic Inc., Brian Mullins, Co-Founder & CEO of DAQRI, Stanley Pierre-Louis, General Counsel at the Entertainment Software Association and Ryan Calo, Assistant Professor of Law at the University of Washington, and was headed by US Senator John Thune, chairman of the Senate Committee on Commerce, Science and Transportation.

During the opening majority statement by chairman John Thune, the potential impact and positive effects of AR was put forward to the senate. “AR could one day have a major impact on manufacturing, transportation, medicine, and eventually the everyday lives of Americans”, said Thune. “For example, imagine a worker in a factory whose job is to assemble an advanced jet engine for an airliner. With an AR headset, that worker could see step-by-step instructions floating above his workstation, with the exact spot he is supposed to weld being digitally highlighted.”

After proposing the positive impact that AR could have, Thune made a point regarding policy-making around the emerging technology, “While there are certainly important policy questions to consider, such as the privacy of user data recorded by AR devices, it is essential that policy makers not unnecessarily stifle innovation.” This premise was shared by Brian Blau, the first on the witness panel to make their oral statement, in saying, “Innovation needs to be supported and accelerated without undue restrictions. “The result will be a plethora of new computing experiences that drive increased productivity across many industries, improved effectiveness of individuals within their work and exciting new developments in the leisure, entertainment and retail sectors.”

The Next Big Thing

John Hanke and Brian Mullins discussed the scale and potential of AR further. Hanke described AR as a, “Hundreds of billions” opportunity, after outlining his company’s success with Pokemon GO. Mullins said that as an emerging technology AR, “Rivals that of the internet itself.”

Irrespective of Thune and Blau’s shared notion of limiting restriction on AR to help its growth, the questions of law and policy were a major focus throughout the rest of the hearing. Next to speak from the panel was Ryan Calo, who acknowledged that, “AR raises a variety of questions of law and policy, including free speech, privacy, potentially novel forms of discrimination, and distraction.”

A main concern for Calo and the University of Washington was personal security, “Will the constant recording of one’s environment give hackers, companies and government unparalleled access to the bedroom, the boardroom and private spaces?” He then put forward the issue of discrimination as a consequence of AR, something that has rarely been discussed during the technology’s rise, “Are there situations, like job interviews, where knowing everything about an individual in real-time could result in discrimination, or subject the AR user to legal liability?”

Calo made some recommendations to help address the potential issues that will come with AR’s transition into the mainstream. He believes that most importantly, policy makes should recognise how quickly AR is advancing, meaning that, “Law and policy should not assume a fixed instantiation on AR over time.” To create practical counters to issues, Calo advised that businesses and government should, “Conduct threat modelling” in anticipation of what adversaries may do with AR technology.

Pierre-Louis also focused mainly on the legal concerns of AR during his statement. Contrary to Calo’s view, he claimed that AR can already, “Fit neatly into existing legal frameworks (because) after all, these are technologies that - at their core - are advanced content delivery systems.”

The questions that followed the expert panel’s statements were focused on cyber security and the potential for physical harm from a compromised AR system. For example, one senator asked if a hacker could visually augment an AR HUD in an aeroplane, potentially leading to a crash. The panel responded and agreed that these were the kinds of scenarios that must be testing during threat modelling, before AR tech can be adopted into various industries.

The fact that the government of the country that acts as self-appointed leader of the free world is holding special hearings to discuss AR is a clear indicator of the impact this technology is already having. The hearing surfaced some interesting concepts and concerns, as well as giving us some insight to AR’s future in business and consumer life – and the kind of issues it could bring.