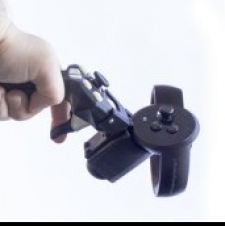 Tactical Haptics has announced that it’s won a total of $2.2m in funding. The company received $749,000 from the U.S National Science Foundation (NSF) and closed a $1.47m seed round, led by SV Tech Ventures. Tactical Haptics will use the funds to accelerate its development processes and expand its team.

Using Reactive Grip touch feedback, Tactical Haptics’ motion controller applies in-hand shear forces to create realistic physical feedback for VR. For example, VR users could get a realistic feel of the stretch of a bow and arrow, the kickback of a gun as it fires, or the impact of a ball hitting a tennis racket. What’s more, the company pledges a viable price for the VR consumer market.

With the NSF research grant, Tactical Haptics aims to improve ergonomics and reduce device size, mass and cost. The company’s ongoing focus will be on creating a dev kit for VR developers, allowing them to integrate the company’s motion controller with their games and experiences. The dev kit will support multiple VR platforms, and can be used as a replacement for the HTC Vive or Oculus Touch controllers.