Rock Out With Avenged Sevenfold In Live VR Experience 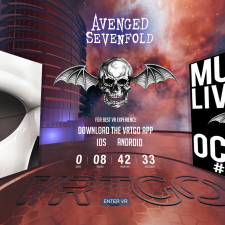 Multi-platinum rock band, Avenged Sevenfold, will give a global 3D 360 video live-streamed VR performance tonight in partnership with Universal Music Group (UMG), Capitol Records and VRLIVE. Fans will be able to tune into UMG’s newly released VR platform, VRTGO, to get the first-of-a-kind experience of Avenged Sevenfold’s set during the evening of October 27th.

Heiner Lippman, Founder and CEO of VRLIVE says, “We are excited about our partnership with Universal Music Group as it gives us the opportunity to provide the viewing audience with unprecedented levels of access”. He also gave his thoughts on VR’s impact on the media saying, “VR is destined to change the media landscape, which enables users to not just view entertainment, rather, it allows them to experience it.”

The performance begins at 8.30pm PDT, or 3.30am GMT on the band's Facebook page.