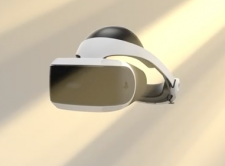 As anyone who’s tried to buy PlayStation VR in the days following its commercial release last Thursday will tell you, hardware is hard to find. The launch has been so successful that many of the major retailers have no remaining stock just days after going on sale to the public.

In an interview broadcast by CNBC, SIEE President Jim Ryan said, "We know from the data we have from pre-orders that the interest we have is significant.” It’s too early for Sony to release week one sales figures for PS VR, but Ryan promised that launch sales will be in the, "Many hundreds of thousands".

In the same interview, Ryan said that Sony is working with content producers to bring non-gaming experiences to the PS VR,"With PlayStation VR, the philosophy is that it's first and foremost a gaming platform, but that equally people will expect non-gaming experiences on PlayStation VR. We have a number of those at launch and many more will follow."

With no details forthcoming about when Sony expects to release more PS VR hardware onto the market, how do they plan to meet consumer demand? Ryan explained that, “We have made decisions to further increase capacity at the back end of 2016 and into 2017, so there are going to be a lot of PlayStation VRs around the world, whether that's enough to satisfy the demands of the market, we'll see."