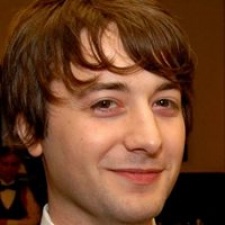 I run Robot Invader, where I make rocking video games.

I am a walking encyclopedia of horror games.

I can do a pretty fantastic handstand.

Chris Pruett, the co-founder of Robot Invader, ex-Googler and now the developer relations man at Oculus VR, took to the stage at GDC 2015 with top tips on transporting complex tablet games to mobile VR.

He drew from his experiences at Robot Invader designing Dead Secret, a first-person murder mystery game initially designed for the tablet but now rebuilt for virtual reality on the move.

The issue, he said, is that when you port a game from mobile to VR you suddenly find you can't play it. Instead you can only look around it.

"We're going from a tablet that that has lots of verbs like zoom, tap, pinch shake. And those are all gone now. We only have tapping."

Robot Invader decided to radically simplify Dead Secret's control system, choosing not to utilise an extra Bluetooth controller but instead implement a "gaze cursor" that floats in front of the player's nose.

"You look at where you want to go, you tap the side of your head, and you walk over there," Pruett explained.

Back to the drawing board

Unfortunately, it now meant that the game's interaction-based puzzles could no longer work with a simplified UI.

Instead, Pruett reworked the puzzles to fit VR, turning them from mechanical puzzles into logical ones. For example, rather than pushing two buttons at the same time to progress, you might have to find different objects to complete a puzzle.

Players will explore the world in a non-linear fashion: what Pruett calls Recursive Unlocking

Another issue to solve was motion sickness. Since most people feel ill due to rotating in place, the team drastically simplified locomotion and in-game actions in order to make the camera move as little as possible.

To compensate, Robot Invader had to make the environments more complex by packing them with interesting objects.

Navigating these rooms becomes a key part of the VR experience, so as the player progresses they must go back to rooms already visited and find keys to unlock more areas. It means the player will explore the world in a non-linear fashion, moving back and forth between puzzles and rooms to slowly open up the map.

This is what Pruett termed "Recursive Unlocking," and he said it works brilliantly for virtual reality.

The final hurdle for the team to overcome in porting Dead Secret to mobile VR was text.

"We have a lot of text in Dead Secret," said Pruett.

When we had a tablet game we did text through little subtitles like 'hello, I'm looking for a killer.' In VR that's pretty much the worst thing you could do, by forcing your eyes to focus on a little spot away from the background plane it's focusing on.

"So instead all of our text is stuck to the world, for example, on a table."

By sticking all the VR text to enviromental objects, it forced the team to tighten the story by halfing the game's wordcount.

"Reading in VR is just hard generally,"  Pruett admitted. "These devices available today are the highest resolution, and it's still not enough. So we ended up reducing the amount of text in our game which actually helped us make it tighter"

All these changes made Dead Secret a fundamentally better game, and one that is set to hit virtual screens in 2015.