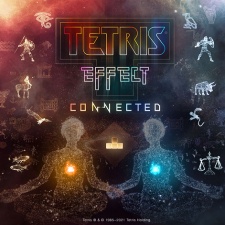 Who needs a new version of Tetris? Especially in VR. It's a game we've been playing since the 1984 original on Game Boy and for all the subsequent new colours, animations and party modes, that's still the definitive edition. There have been more than a few versions since that haven't added to the appeal, so that was our thought process going into this review. We were wrong. Very wrong...

This particular game - developed by Monstars Inc., Resonair, and Stage Games; published by Enhance - first came out a couple of years ago, but it's getting another push now it's launched on Steam with full cross-platform online multiplayer. So when we were asked if we wanted to review the latest incarnation of this evergreen classic - full disclosure: we received a free review code - we thought 'Why not?' I mean, at worst we'd get to try an all-time top five favourite in VR, right?

This is one of the most purely playable incarnations of everyone's favourite brick puzzler since the original.

Tetris is as Tetris does

The gameplay in Tetris Effect: Connected is exactly as expected - and thank the eternal T-spin for that! Don't fix what ain't broken, after all.

That said, this is one of the most purely playable incarnations of everyone's favourite brick puzzler since the original. We have not once experienced an unfair drop, bad rotation animation or felt like the game is getting between us and pure 4-high dropping perfection. We used to work with a former international Tetris champion and I think even he would approve.

But what does playing Tetris in VR add to the game? In terms of gameplay? Nothing. Blocks fall down a chimney for you to arrange as best you can to clear rows and avoid hitting the roof. So far, so familiar.

But it's another story entirely in terms of the experience. In the main campaign mode - Journeys - the game has 27 stages split into seven areas, each with its own distinct setting. Setting? In Tetris? Well, yes.

You'll start playing underwater in a sandy cove, but later sections see you surrounded by stylised neon whales, Chinese parasols or floating windmills with more than a hint of Salvador Dali. And all to an eclectic soundtrack that runs the gamut from folk to EDM and heavy guitar. This game is brought to you by the people who brought you the award-winning Rez Infinite and Lumines, after all.

It's all set dressing at the end of the day, but that doesn't do justice to the experience, which is in turns trippy, relaxing, absorbing and frantic. This is one of those times where VR can add another dimension to a game, even if the core experience remains unchanged.

The 3P 'Connected' co-op for more team-spirited players - either against AI or a Boss player is a real innovation and a welcome fresh twist on playing Tetris with others.

We're old enough to have hosted a games sleepover when online gaming was just a dream and the first PlayStation was cutting edge - and we had TWO of them, plus two TVs and a link cable, which was a rare confluence. But such is the pure competitive experience of multiplayer Tetris that we still ended the night hunched over a pair of linked Game Boys.

So we shouldn't be surprised that Tetris Effect: Connected places great emphasis on online multiplayer modes - the clue's in the name, after all. The first thing we learned about any of the Connected modes is that we're not nearly as good at Tetris as we might like to think. We've never felt the need to hone our hard drop before...

The marketing makes a big deal out of the game being cross-platform, including PS4, XBox, Switch, PC or VR. This is how all multiplayer games should be. All you need is a 4-digit Room ID code to link up with your friends. And if you're going in solo, then you won't even know who's playing on what.

You get the customary 1v1 'Zone Battle' competitive mode, as well as a 'Score Attack' versus mode, but the main draw is the 3P 'Connected' co-op for more team-spirited players - either against AI or a Boss player. This is a real innovation and a welcome fresh twist on playing Tetris with others. All three individual chimneys combine at times for all players to use. If you get good players that work together to use their pieces to clear adjacent lines, then it adds another strategic layer to the gameplay. If you get dicks that pile up your area, then it's not so fun.

And in this age of games as a service, there's even a 'Weekend Ritual' spotlighting different effects modes where all participating players earn points towards a community goal to unlock unique avatars. We've participated in a couple and it's more involving than you might think.

Gripes? We have a few

Very few, truth be told. For some reason, we always have to fire up Tetris Effect: Connected twice to begin a VR session. But given the vagaries of Steam VR vs Oculus, that could be down to user error.

Similarly user-dependent, the IPD distance needs to be spot on to avoid one column merging into another, adding an unwelcome degree of cross-eyed complexity to the gameplay. It's easy enough if you don't share your headset and can set and forget, but beware if you swap users.

Lastly - and a bit of a pet peeve - Touch controllers don't work with Tetris Effect: Connected. It's almost unbelievable, so well do they replicate the standard controller buttons, but you'll need a gamepad to play. And even then, you need to remember to use the D-pad instead of an analogue joystick. But that said, it all works flawlessly given those limitations.

This is an excellent example of how VR can add so much to a conventional game that it's like experiencing it anew.

We played Tetris Effect: Connected on a monitor to make sure we weren't waxing lyrical about VR just for VR's sake and while the game is still very playable, it was notably less compelling in 2D.

You still have the same objectives, with the same slick controls, but everything feels one step removed and less engaging. It's fun, but we're not 'in' the game in the same way. The scenarios play out with similar brio, but at arm's length instead of all around the player. It's still a good game, but not necessarily one that we'd enthuse about the same way we would our headset-based exploits.

As VR acolytes here at TheVirtualReport.biz, we'll always proselytise experiences unique to the medium, but this is an excellent example of how VR can add so much to a conventional game that it's like experiencing it anew. And isn't that exactly what VR games need to convert mainstream consumers?

Postscript: The purpose of this series is to champion new experiences and hardware that we want to share with you. With such effusive comments, no doubt more cynical readers will suspect a paid-for product placement, but I've been reviewing games professionally since 1998 and in that time, I've even been threatened with legal action for calling out shitty games. I don't intend to compromise my editorial integrity any time soon. Just so's you know…