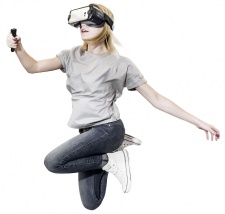 Californian positional tracking developer Antilatency has raised $2.1M in seed investment from the Europe-based IIDF venture capital fund. The new funding will be used to accelerate the worldwide release of ALT: Anti-latency tracker – a mobile VR and AR positional tracking solution. The device allows user to walk around with mobile VR as opposed to existing solutions which only work with head rotations.

Other benefits include movement prediction with compensation of rendering lags, wide tracking zone, multi-user mode, and outdoor functionality. The system is low cost and easy to install, doesn’t require calibration, and doesn’t cause any dizziness or disorientation.

Ilya Korolev, Principal (portfolio management) at IIDF said, “Virtual and Augmented Reality is a cutting edge niche demonstrating the capabilities of advanced technologies. As the global number of active virtual reality users is forecast to reach 171 million by 2018, the industry needs the solutions to improve the user experience. We are happy to support Antilatency in bringing innovative ALT: Anti-latency tracker to the market”.

ALT: Anti-latency tracker demo was first shown in April at VRLA and will pre-launch at CES Asia (June 7-9) and E3 (June 13-16). The tracker will be sold in the USA, Europe and China starting from $99 for a Consumer edition.

Following the pre-launch, Antilatency plans to open a developer kit pre-sale and raise funds on Kickstarter by the end of summer 2017. A business edition of ALT: Anti-latency tracker will hit the market featuring extended software to create infinite tracking area.

The tracker detects its own coordinates by infrared light markers on strips which define the tracking zone. Unlimited number of trackers can locate itself within the same zone powering multi-device and multi-user scenarios. The system provides up to 4 seconds of redundancy for moments when the camera loses sight of the strips so it can keep working even if the markers are obstructed, for example, by another user.