1 In 5 Brits Would Prefer To Live In VR 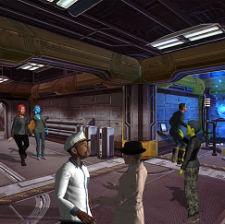 New research released today from Geekzonia, a free social, entertainment and retail VR platform, reveals one in five Brits (17 per cent) would prefer to be living in a virtual world to their existing reality.

The survey of 1,000 people in the UK, carried out by OnePoll and commissioned by Geekzonia, revealed 22 per cent cite Brexit and Trump as reasoning for wanting to live in a virtual universe. Other drivers for preferring to live in an alternative dimension include wanting to visit extraordinary places such as Mars, Gotham City and Mordor (46 per cent) and to meet favourite fictional characters such as Superman, The Hulk and Captain America (33 per cent).

The poll, which looked at the level of interest people have in escaping reality for a virtual realm, also examined how they would develop their avatar to represent them in this alternative dimension. The results revealed that body confidence transcends into the virtual world, with the majority of respondents (39 per cent) admitting they would make their VR avatar look like themselves, only better looking.

“It’s no surprise that people are experiencing a sudden desire to live in a virtual universe,” says Peter Dobson, CEO of Geekzonia. “Virtual Reality has the potential to make people feel invincible but also allows them to meet other like-minded people from around the world without needing to leave the house. The level of connectivity and surreal experiences Virtual Reality enables us is thrilling and gives us the opportunity to escape some of today’s harsh realities.”