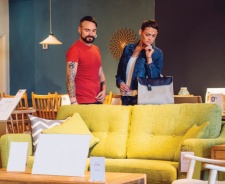 Augmented Reality could be key in encouraging more customers to make purchases, according to a recent report by DigitalBridge. Based on independent research of 1,000 UK consumers conducted by Usurv in October 2016, the report focuses on the home improvement sector - DigitalBridge’s area of expertise – so the potential benefit to Britain’s economy could be considerably greater across all retail sectors.

The key finding of the report is that the majority of consumers lack the ability to visualise how an item of home décor will look in their own home, usually resulting in a postponed purchase – or the project may be abandoned entirely. This is what the report refers to as the ‘imagination gap’, stating that it is a major commercial challenge.

DigitalBridge suggests in the report that, ‘Using innovations like virtual, augmented and mixed reality platforms, computer vision and 3D depth imagery, retailers can make it possible for consumers to virtually “try on” home décor items and see what new furniture, wallpaper or flooring will look like in their own rooms, with their own mess, before they spend a penny.’

The report finds that nearly 30 million consumers (60 per cent) in the UK are planning to make improvements to their homes in the next 12 months, based on ONS figures of 51m adults and answers from the subject group.

The survey found that 25% of respondents intend to spend in the region of £500 on home improvements in the next 12 months. Forecasting retail sales based on these baseline numbers in comparison with figures from the Centre for Retail Research showing that UK consumers spent an estimated £60bn online last year, leads to a potential £1bn lost sales for retailers if the imagination gap continues to impact customers as found in the survey data, where a third of participants revealed they put off making purchases or decided against undertaking projects because of the imagination gap.

Accurate AR representations of home improvement items could also have extended benefits, by reducing the number of items returned as unsatisfactory. More than 40 per cent of consumers surveyed revealed they had returned home décor products for this reason. More than a third said they have returned a product because they didn’t like how it looked in a particular space, because the colour didn’t match the room, or because it didn’t fit as expected.

David Levine, CO at DigitalBridge explains that, “With so much uncertainty already swirling around about the future of UK retail, businesses need every advantage they can get to remain competitive, especially those competing for attention online.” He goes on to say, “With as much as £1bn of revenue up for grabs in the home décor market alone, retailers can no longer overlook the value of virtual and augmented reality as a commercial tool. More than half of the consumers who took part in this survey said they would be more likely to make a purchase after using this technology. These types of visualisation tools could be the ‘undo button’ to home interiors that consumers have been calling for.”

You can read the full report here.

Coca-Cola Turns To VR And AR For Halloween