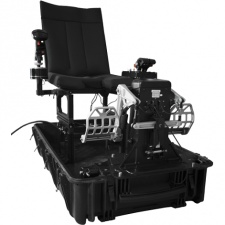 Vrgineers, a leader in delivering next-generation virtual and mixed reality pilot training systems to professional and military clients, has donated its Portable Trainer, a reconfigurable virtual pilot trainer, to the Ukraine Airforce to help with securing airspace and train tactics with mission rehearsal.

Based on the results from experimental research on the use of VR and simulators in training pilots, Vrgineers believes that their technologies can speed up and enhance the training of jet fighter and helicopter pilots, while simultaneously reducing associated costs when transitioning from eastern platforms to modern, western platforms.

For decades now there has been a push to modernise the current training methods, driven in part by the costs of altering and maintaining large dome simulators; the inability to keep training devices up to date as aircraft in the field and corresponding software update faster than training simulators; and an overall lack of expert training professionals.

The demand to modernise is even more necessary in countries and air forces that have been dependent on eastern training methods and devices such as Ukraine. Russian manufacturers have discontinued the supply of spare parts, forcing several rescue and transport aircraft to be grounded all over Europe, based on EASA regulations.

Vrgineers trainer simulators are developed in close cooperation with the U.S. Airforce and U.S. Navy as a part of the SBIR (Small Business Innovation Research) program to accelerate pilot training, speed up the process and increase the preparedness of pilots. Such trainers offer affordable simulators with realistic synthetic training environments, which can be deployed anywhere. They can be interconnected with one another for group training, used individually for mission and tactical training, or full procedural training. Simulators are already integrated with such IGs as Prepar3D, X-Plane, VBS 4, or MCS.