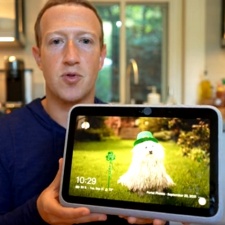 Facebook CEO Mark Zuckerberg took to Facebook Live today (September 21st) to reveal a pair of new Portal devices for home and office. Which is cool n' all - who wouldn't want a 21st Century Amstrad Emailer- but it was only in the last minute or so that our ears pricked up.

Of course he's 'excited' about the hardware reveal, but in Zuck's own words, "These products are all kinda connected to this future that I've been talking about; trying to build around this idea of the metaverse". We might wish for a stronger definition of that 'kinda', but at least he qualified that statement with, "Being present with each other is going to be the defining quality of the metaverse".

While people continue to argue about what the term 'metaverse' actually means, we're going to predict that accessing it will not be limited to XR, as some folks suggest. It may well be the best way to experience it, but not the only way.

That chimes with Zuckerberg's feeling that, "There are going to be a lot of ways to feel this sense of presence and to be together in digital spaces, from virtual reality to augmented reality to great video calling and more". We may not be particularly convinced about telepresence over even a flatscreen avatar-based experience, but Zuckerberg reckons that, "Portal is going to be a gateway for a lot of people to jump into some of these experiences".