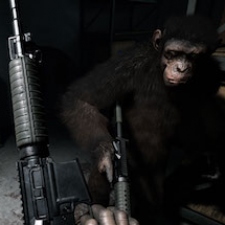 FoxNext has tapped another big entertainment IP to develop a new virtual reality game called Crisis on the Planet of the Apes VR.

The game is being made in partnership with UK developer Imaginati Studios and is set between the Rise and Dawn of the Planet of the Apes movies.

Crisis on the Planet of the Apes VR is played from a primate’s perspective, in which they are captured and have to battle against humans in a fight for to escape captivity. Players will be able to play together as a group of captive apes in order to survive.

It’s not the only VR game FoxNext is involved in with the studio already working on an Aliens VR game, following on from the release of the Alien Covenant: In Utero experience.

The game will debut on the April 3rd on PlayStation VR, Oculus Rift and HTC Vive virtual reality headsets.

FoxNext is bringing a swathe of film and TV IP to a number of platforms, including mobile. Last year the company acquired a team of ex-Kabam developers at AfterShock, which is working on a series of Avatar games. It’s also a teamed up with Creative Mobile for a new X-Files game and partnered with NHN Pixelcube for a Kingsman title.

“VR has always held the promise of bringing together the cinematic storytelling of film and the deeply immersive interactivity of games. Crisis on the Planet of the Apes VR takes this potential to the next level,” said FoxNext VR Studio GM Brendan Handler.

“We set out to give the fan a lead role in this dark Planet of the Apes world, to feel the ape’s strength, power and movement as he fights his way to safety.”