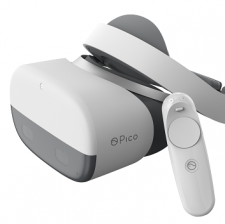 At a press conference held in their global headquarters in Beijing, Pico officially revealed the Pico Neo as the world's first mass-produced standalone VR device with six degrees of freedom (6DoF) for both head and controllers.

The Pico Neo is available for pre-order in the US and EU for qualified business customers and developers for $749.00. Pre-order at www.pico-neo.com

Although the company has been focusing on the Consumer market, it never stopped exploring applications within B2B industries. Pico established the Enterprise Program at the end of 2015 and after more than two years of R&D experience and exploration, the company has developed several industry application solutions-based on Pico’s full line of hardware products. These include:

Pico also launched a new set of Pico Zense TOF depth sensor solutions - the DCAM100 and DCAM710 - as its core hardware products. The two camera modules are based on TOF technology and feature small form factors, economic power consumption, clear imaging, VGA standardized precision, and can be used in the range width from 0.2 meters to 8 meters.

Pico Zense’s hardware modules, the DCAM100 and DCAM710, are available for pre-order in the US and EU for qualified business customers and developers for $299.00. Pre-order at www.pico-interactive.com/zense

Pico will be attending CES 2018 to showcase the Pico Goblin, Pico Neo and the Pico Zense DCAM100 and DCAM710. To learn more, please visit the Pico booth at the Las Vegas Convention Center in South Hall 1, Tech East Zone at Booth number 21718.

Focal Point: Are Standalone Headsets The Cure For What Ails VR?