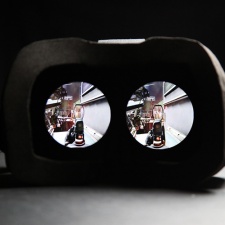 It seems like there's a new virtual reality head-mounted display (HMD) every week, but the VisusVR has really caught out eye.

We've already got the likes of Oculus Rift, Sony's Project Morpheus and Totem, which are dedicated headsets designed to be used in conjunction with a PC or console.

Then there's Samsung's Gear VR and Durovis Dive, which are smartphone holders that use the handset as the brains and display of the virtual reality system.

The VisusVR system takes a unique approach that, it would seem, cherrypicks the best options from both the virtual reality options.

The HMD accepts your smartphone as the display, which reduces the cost of the unit significantly.

But it's the PC that runs the game, which the designer - quite rightly - suggests is far better equipped to run a side-by-side 3D virtual reality game. A video feed is sent to the smartphone, so the handset isn't laboured with running the software, thereby reducing latency.

Los Angeles-based Visus even recommends making use of existing live video streaming options such as Splashtop to remove wires between the PC and smartphone. Further reducing latency is an onboard headtracking that identify itself to your PC as a wireless air mouse, taking some of the heavy-lifting off the system and providing a smoother, more responsive experience.

It even has built in fans to keep the large lenses clear, which, depending on the size of smartphone, can offer up to a 110 degree field-of-vision. Impressive.

The VisusVR system is on preorder already for a very wallet-friendly $99, with the first batch of units expected to ship around December.