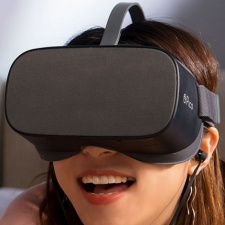 The announcement was made in an internal letter to Pico employees, quick to allay any fears of exiting the market stating that, 'Users will receive more content support and technology upgrade services in the future based on enjoying the original services'.

We understand that Pico will incorporate ByteDance's VR-related business, along with content and technical assets, with increased investment in research and development for future projects.

Although the exact value of the acquisition has not been disclosed, China's VRtuolo claims the deal to be worth $775 million (¥5 billion). That's not quite the $2.4 billion Facebook paid for Oculus in 2014, but it has to be the biggest single investment we can recall otherwise.

Pico was founded by the current CEO Zhou Hongwei in April 2015 and IDC reports Pico as the top VR hardware manufacturer in China. The company's consumer flagship the Pico Neo 3 was released in May, priced at around $400 (¥2,499 yuan), with sales passing 10 million units in the first 24 hours. A more expensive Pro version followed in July for the enterprise sector, offering an 8K display powered by the Qualcomm Snapdragon XR2.

Since launch, Pico has focused on international enterprise customers and the domestic consumer market, but we fully expect this acquisition to trigger an advance on the global stage. With Oculus running away with the VR standalone headset market in the West, thanks to stellar sales of the Quest 2, the prospect of a competitor in the form of the Pico Neo 3 is welcome - competition improves the breed, after all.

All out to fight!

ByteDance already owns short-form video social media app TikTok, so will we see VR or AR functionality to rival the likes of Snap and of course, Facebook, as well as a direct challenge to Oculus' standalone VR dominance with the Quest 2?

Pico CEO Hongwei told Yingwei.com in a previous interview that, “We are still… confident that Pico can continue to catch up with Quest as a… leader in hardware experience". He went on to confirm that their ambitions extend beyond HMDs and into software too, "Next, I believe that our content will quickly narrow the gap with Quest. This part - the non-exclusive content of the existing Quest platform - we are going all out to fight for".