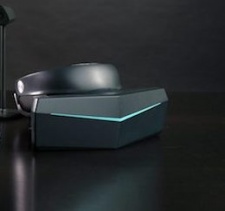 Shanghai-based startup, Pimax, announced a successful round of Series A funding for its 8K VR headset, which amounted to just under $15 million.

Originally reported by Chinese publication, PEdaily, investment comes from Pegasus Shares and Offei Technology. The funding will be used for research and development of new VR headsets; including the so-called 8K HMD which aims to stop the feeling of motion sickness and offer enhanced visuals.

The headset features a 200-degrees field of view (FOV) – significantly more that Rift or Vive - with two 3840x2160 panels, one for each eye. By our reckoning, that equates to a 2x4K headset, not 8K as claimed. The display has a 90Hz refresh rate per eye and compatibility with PiHome, SteamVR and Oculus Home – although, a third-party tool is required.

Fu Miao, Chairman and CEO at Tianma, one of Pimax’s recent investors said, “As an industrial capital, we are very optimistic about the future development of VR. VR has been moving toward consumer electronics… As more and more people are embracing VR and using VR, VR can dive deeper into more scenarios and become as much a part of our lives as PCs and mobile phones."

Pimax’s upcoming VR headset is expected to ship as soon as January 2018 for early backers.