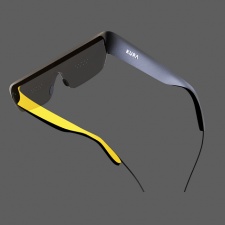 Kura Technologies has been honoured with a CES 2022 Innovation Award for its Gallium glasses, which set industry standards, as the makers of the best performing AR glasses and platform.

This year’s CEO innovation Awards program received a record-setting number of more than 1,800 submissions and is one of the most respected and renowned awards for frontier electronic devices.

It was a well-deserved award seeing how the Kura Gallium reportedly betters and outperforms every other AR headset in important aspects such as transparency, resolution, field of view, form factor, depth of field and brightness.

Kura Gallium was also celebrated as the first-ever AR glasses to achieve a complete frame field view of 150° which is far superior to their closest competitor’s 52°.

It has a stunning display transparency of 95% that allows it to display images that blend seamlessly into one’s immediate surroundings. While the current best alternative only offers 25% transparency.

Prior to the CES award, Techradar wrote about Kura Technologies, stating that the company has worked on Gallium for years and “it’s shaping up to be one of the most impressive consumer AR devices we’ve seen yet”. It then went on to pour more positivity towards the Gallium by stating that it would be “worth investing in when it launches.”

The company’s architecture has been reported as catapulting it past its competitors. Kura’s entire roadmap has been structured around creating novel proprietary approaches to the technology ex novo, rather than depending on modifying existing systems and components.

The Gallium’s ability to allow a 1:1 virtual to reality ratio was specifically designed to give users an immersive experience in a telepresence environment. This feature is one that seems critical in laying a foundation that’ll blend metaverse content into a user’s immediate surroundings.