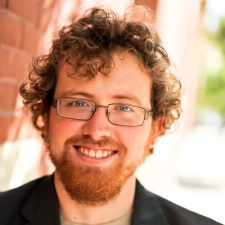 Corey King is an award-winning creative, his current project Clandestine: Anomaly has been showcased for its innovative design at conferences and in publications around the world. To complete this Augmented Reality mobile game, he’s attracted a team of industry veterans and raised over $1.3 million.

Pocket Gamer Connects London will kick off 2016 in style on 18-19 January.

So to give you a hint at what you can expect, we're shining the spotlight onto our speakers to provide a deeper look at the personalities who will be taking the stage.

Corey King: ZenFri is an award-winning creative arts and entertainment company with a deep passion for pushing the boundaries of storytelling.

Clandestine: Anomaly represents a bold step forward in what we believe will become a vibrant future in gaming and storytelling mediums.

Through this project, ZenFri has become recognized as a world leader in augmented reality entertainment and technology, winning the GamAR grand prize at InsideAR, and earning nominations for innovation and technology at the Canada Video Game Awards and The Tech Expo (London).

We see our role in mobile gaming as one of innovators, our passion is to try to push the boundaries of interactive storytelling, and Clandestine: Anomaly is merely the first example.

2015 was another hectic year for the industry, what were the highlights or most important developments you saw?

While it really only started to pick up consumer momentum at the end of 2015, mobile VR has really gained a lot of traction in 2015 with Google Cardboard, and the release of Gear VR.

Just within my small Prairie city of Winnipeg in central Canada, I personally know of 4 or 5 developers that are experimenting with and investing in VR and mobile VR.

It sort of feels like a critical mass started to gain momentum in that category, and while focus remains on the more robust solutions like Vive and Oculus, mobile is also playing a surprising role especially in the more price-sensitive areas of the market.

Relatedly, there was some big - though largely missed - news in the AR field, such as acquisitions of leading platforms and SDK providers by the likes of Apple that really set the industry scrambling by mid-2015, and stilted the launch of many AR projects.

PG Connects kicks off 2016, so give us a prediction or two of what we can expect to see in the new year.

I think VR is going to be the thing to watch this year.

While I’m not sure if it will actually take off, due to multiple competing products with varying requirements and features, consumer confusion between mobile and PC VR, development costs, the social awkwardness of wearing a headset, and the cost of getting a good VR set-up, we’ll get to see how some of these factors play out in 2016.

It’s not quite do or die for VR, but we’re at maximum hype right now, and we’re going to get to see if the tech sputters or soars, and that’s incredibly exciting.

We’re looking at early the stages of a few VR projects ourselves, both in terms of mobile gaming and film.

Ray has been an enthusiastic gamer since the age of 5 and has seen his work published all over the internet. He is a proud iPhone 4S owner and absolutely adores working for 148apps. He also plays a mean game of Jetpack Joyride.

With $50 million to invest in VR, why COLOPL thinks arcades are the best place for its early adoption