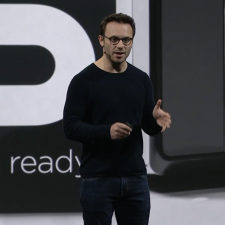 At yesterday’s Oculus Conn3ct event in California, Oculus CEO & Co-founder Brendan Iribe, reported that their Asynchronous Timewarp already delivers a 50x reduction in glitches, “But it’s not a silver bullet. It’s great for looking around - for head orientation - but it doesn’t work for positional movement. So if you’re moving your hands or the entire scene is moving, you might experience judder.”

Oculus has been working on Asynchronous Spacewarp to solve this issue. Iribe explained that it, “Takes the app’s two previous frames, analyses the difference and it calculates the spatial transform to extrapolate and generate a new synthetic frame.”

Spacewarp takes the strain off the user’s PC hardware by reducing the app’s framerate to 45fps and using a synthetic image every other frame to still display at 90fps. Iribe claims that this solves problems with head translation, moving objects and even the entire scene, “So when you’re moving your hands in the scene, you won’t have judder or ghosting images.”

No Substitute For Power

Spacewarp will never make your powerful GPU redundant, but it does mean that consumers will be able to access PC VR without high performance ‘enthusiast’ hardware. And will all this techno-trickery be difficult for developers to implement? Not at all; “It’s built into the Oculus runtime and it works automatically.”