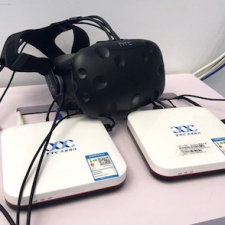 HTC, in partnership with Dalian Television and Beijing Cyber Cloud, is launching the world's first cloud VR service for a commercial trial in Dalian, China. The online store lists ‘a few dozen’ Viveport games and apps, as well as 360-videos according to HTC, with more to be added.

Another potential benefit of VR in the cloud is that it sidesteps a large initial outlay for Vive and a powerful PC. Users will pay a refundable deposit of 3,000 Yuan (£336) – payable upon return of the Vive hardware - and a monthly fee of 500 Yuan (£56).

Alternatively, users can make an upfront payment of 6,688 Yuan (£748) for outright ownership of the Vive, plus one year’s subscription to the service, representing a saving of £538 compared to separate purchase of the hardware (at local prices) and 12 months’ subscription.

While some have expressed their concerns regarding latency via the cloud and its potential to cause motion sickness in VR, the package does include a 60 Mbps broadband connection – roughly equivalent to 4G. Answering this concern via Twitter, said that there will be, "Yes, some minimal added latency, but ok for most non-twitch apps."