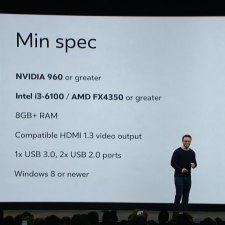 This new min spec is a direct result of Oculus’ positional solution, Spacewarp. Iribe observed that, “While there’s no replacement for native 90hz framerate, Spacewarp makes it easier for lower end machines to power VR. This will expand the audience. With lower CPU and GPU requirements, people can get into VR at a lower cost on a wider range of hardware.”

To emphasise the point, Iribe announced that Cyberpower has a new AMD based min-spec machine for $499, saying, “PC VR has never been so affordable. That’s half the cost that we introduced PC VR last year.”

Ocullus started with six PC hardware partners and 11 certified machines, which has grown to 11 partners and more than 40 machines in the last year. While the specs started around $1,000 last year, Iribe told us that, “You can now get in for under $700.”

We have to admit that Cyberpower’s $499 is under $700, but it seems odd to us that Iribe chose to flag up the higher number so quickly after the reveal. Still, there’s no denying that as he said, “The costs keep coming down.”