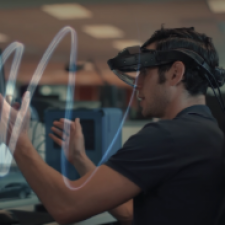 With Augmented Reality nowhere in sight for end users, this could be a golden age for Virtual Reality. VR hardware from Oculus and HTC is already being shipped to consumers and Sony’s highly anticipated PlayStation VR launches next month. Meanwhile, neither Microsoft nor Magic Leap have even announced release dates for their MR/AR headsets, but you can guarantee it won’t be in time for the annual festive retail boom; if you’re looking for a headset shaped parcel under this year’s Christmas tree, it has to be VR.

Perhaps it’s unsurprising that keen consumers are already asking, “Where are the HoloLens, Magic Leap or Meta?” Well, if you happen to have a spare $3,000 and live in the USA or Canada, you can buy a HoloLens Developer Edition right now – or why not get the maximum of five while you’re about it? But AR just doesn’t exist as an option for the general public right now; what’s taking the time?

As both AR and VR utilise lenses and headsets to create content for the individual, the two seem superficially to use (very) broadly similar technology. While that’s true to a point, AR has an additional level of complexity to overcome; the unpredictable and messy maelstrom that is the real world. AR is just plain harder to develop than VR.

Developing an interactive experience in a virtual world might sound like the taller order, as developers are tasked with creating an entire environment for the user to inhabit. But that totality of creation actually makes the task easier – although not ‘easy’ per se – because the developers have total control of everything that's presented to the user. Beyond computing hardware specification and processing power, VR works to a closed set of parameters to present everything the user sees and hears.

But where VR demands that you fit into its world, AR has to fit into yours. That means it has to quantify the environment it finds you in, taking into account everything from physical space to lighting conditions. Then it has to place every element into that scene. Doing that requires a combination of advanced optics, ‘computer vision’ and physics engines.

Whether your AR experience is a location-based marketing app or a fantastic adventure game, the hardware has to overlay its graphics onto the physical world, with all the unpredictability that comes with it. We’ve already seen basic implementations of this with Pokemon Go and Snapchat filters, but true AR will integrate 3D User Interfaces and other elements in real time.

And Mixed Reality takes that to the next level by presenting elements that blend seamlessly into your environment to create a persistent experience, whether that’s learning about anatomy in three dimensions in the theatre you practice in, or being plucked out of your own home by a giant. That’s an order of magnitude more demanding than serving up XYZ coordinates in the closed environments of VR – and VR is already a hugely complicated technology.

So the next time anybody asks you why they can have VR, but not AR/MR right now, just tell them it’s not that easy – and boy, will it be worth waiting for!

Find out why AR might take longer but could be bigger here.