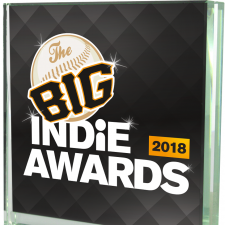 Following the news that The Virtual Report's publisher Steel Media and world-famous South Korean gaming event G-STAR have expanded their partnership, we can reveal more details about the forthcoming Big Indie Awards.

New for 2018, the spectacular Big Indie Awards will take place during the G-STAR conference on November 15th to 18th at BEXCO, Busan in South Korea. They celebrate innovative indie games for mobile, smartwatch, mobile VR, AR or portable/handheld consoles

G-STAR is the hub of the Asian game market and provides an amazing platform for entry into the territory for overseas studios. The awards are a chance for indie developers around the world to submit their projects for global recognition - and gain entry to this thriving territory.

The gala ceremony will mark the grand finale of this year’s global series of Big Indie Pitches in locations that include London, Los Angeles, Vienna and Helsinki.

The winner and two runners-up, chosen by a panel of judges from all the submitted games, will make it through to the final. There will also be a special prize for one winner from the local South Korean games scene.

As well as international acclaim, there’s a prize value equivalent of $26,000 to be shared between the winner and two runners-up, and the three Big Indie Award international winners will be flown to Busan to take part in the gala presentation.

The awards are open to any mobile or portable game projects (including VR and AR) that have been released in 2018 - or one that’s scheduled to launch in the next six months.

Winners of previous Big Indie Pitches will be automatically submitted, including September’s Pocket Gamer Connects Helsinki - the last eligible Pitch for consideration in this year’s awards.

"We're thrilled to be collaborating with G-STAR again this year after a successful 2017," said Steel Media Ltd COO Dave Bradley.

"This year, we're adding the Big Indie Awards finale to our South Korean activity in November. We've run Big Indie Pitch events around the world, giving countless small developers the opportunity to present their games projects to panels of experts.

"The Big Indie Awards is a chance to celebrate the best we've seen from across the globe. G-STAR itself remains the most accessible route into the massive Asian market and is hugely popular, so it's such an honour to be able to celebrate a year of indie pitching there."

Fill out this entry form by September 7th 2018 to submit your project for consideration, when the first round of judging by some of the finest industry experts will create an initial longlist.

After prolonged debate, disagreements and possibly even duels between the judges, we’ll announce the subsequent shortlist in October.

The finalists will also get the chance to join us at G-STAR in Busan, including flights, accommodation and entry to the show. The winners will be revealed to rapturous applause in a gala ceremony on a night they will never forget.

If you think your project could clean up in Korea and want to become an award-winning indie dev with a pocket full of Asian business cards, submit your project to the Big Indie Awards now!

Last Chance To Sign Up For This Weekend’s Big Indie Pitch Competition!

Get tickets to the top Asia conference G-STAR 2021 now