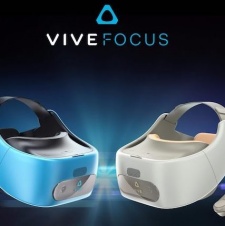 The all-in-one headset was unveiled at last month’s Vive Developer Conference 2017 (VDC2017) in Beijing, China. With no requirement for external processing power such as a PC, the Focus is equipped with an inside-out tracking solution, allowing the user’s head to be tracked in a virtual space without external cameras, a 3K AMOLED display, 75Hz refresh rate and a 110-degree Field Of View.

As originally discovered by UploadVR, converted into US dollars, the ‘Almond White’ edition of the headset will cost $604.49, slightly higher than the $599 pricing of the standard HTC Vive in the US. However, the Vive costs $820.57 in China, so a price drop is expected if the headset was to release in the West. A pricier ‘Electric Blue’ edition of the Vive Focus is also listed for ¥4,999, or $755.65.

HTC’s Vive Focus is available to pre-order from 12th December.