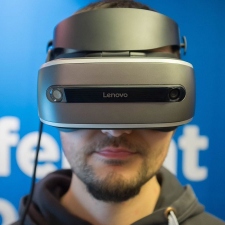 Chinese company Lenovo revealed a non-functional prototype of its Windows Holographic VR headset ahead of Consumer Electronics Show 2017. The yet-to-be-named device will cost less than $400 when it goes on sale later this year, fitting Windows’ theme of affordable VR for the masses.

Two front-mounted cameras will provide inside-out tracking as promised by Windows during the announcement of its VR headsets, while the device features two 1440x1440 OLED panels. The main display assembly rests on a hinge that users can swing up and out of their way when taking a break.

The HMD will run Windows Store applications on a virtual screen, much like PS VR’s cinematic mode, and selected HoloLens applications are reportedly being ported over as well.

With its halo design, the HMD has similar aesthetic features to Sony’s PS VR, with an added dash of Robocop. With a claimed weight of 350 grams, it looks set to be much lighter than either HTC Vive (555 grams) or Oculus Rift (470 grams), suggesting improved comfort for longer VR sessions.

Lenovo are not producing motion controllers, opting to rely on third-party manufacturers to build solutions compatible with Windows Holographic specifications.

The exact date of the headset’s launch has yet to be confirmed, but Lenovo has stated it will be available later this year.