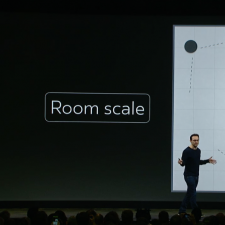 Not everyone has the space to dedicate to a room scale VR experience, but Oculus CEO & Co-founder Brendan Iribe confirmed yesterday at the Conn3ct event in California that Rift with Touch can do it if you can.

The idea is that Touch seamlessly integrates with your Rift system, and the $199 controllers come bundled with a second sensor to give you a wider play area. Iribe reckons, “That’s great for most rooms, [but] it also supports multiple sensor configurations. We support 360, so you can take one of the sensors and put it on the opposite corner of your play area.”

And if you really want to go for the room scale experience? “We’ve created a room scale option using a third sensor for those of you who have the space.”

Oculus Touch goes on sale for $199 from 6th December and extra sensors will be available for $79 on the same date. You can pre-order from 10th October.